There's no limit to Lexus' luxury SUV ambitions, if its 2018 Detroit Motor Show concept car is anything to go by...

This is the Lexus LF-1 Limitless, a Detroit Motor Show concept that hints at a future flagship SUV for the Japanese luxury brand.

The LF-1 Limitless is designed to sit above the RX in Lexus’s line-up - in effect, a companion for the recently updated LS limousine. The concept is 5,014mm long - so 20cm shorter than the latest LS, but longer by a similar amount than the current RX.

It showcases a new SUV for Lexus, a brand which has so far adopted a fairly traditional profile for its vehicles of this type. Designed by a team in California, the LF-1 Limitless has more of a rear coupe stance - a suggestion that, should it be carried through to production, the car be a rival for forthcoming flagships like Audi’s Q8 and the next generation of BMW’s X6. 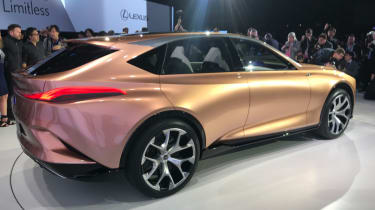 The front-end styling is a new, more extreme interpretation of Lexus’s spindle grille, with an even more pinched effect that’s exaggerated through the use of a pair of crisp scallops in the bonnet. There are no traditional headlights as such, because the LF-1 uses a complex arrangement of LEDs around the grille to provide illumination, and as a replacement for traditional chrome detailing, which is absent.

Lexus hasn’t revealed any technical details on the car, but it says it could be powered by a range of powertrains, including a hydrogen fuel cell, hybrid, plug-in hybrid and pure electric.

The cabin incorporates some novel features, including full controls for the powertrain - everything from acceleration and braking, through to gear selection - mounted on or around the steering wheel. Lexus says the vehicle also has a ‘Chauffeur mode’, where the LF-1 Limitless can take care of steering, braking, acceleration, lights and signals - in effect, Level 5 autonomous driving. 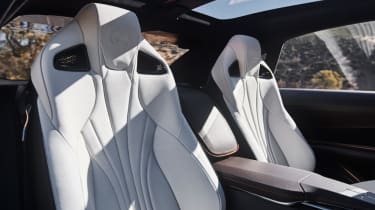 The concept also showcases a new style of infotainment system for Lexus, with a more complex interface which tries to anticipate the needs of the car’s occupants on time-based elements such as fuel stops, food breaks and hotel reservations. The set-up uses a multi-display configuration, although navigation instructions can be sent through to the central ‘pod’ display, which takes the place of a conventional instrument panel.

Are you excited to see what Lexus has in store for the 2018 Detroit Motor Show? Let us know in the comments!