Sebastien Ogier set for his WRC title defence with Ford, as manufacturers expect a close fight in 2018 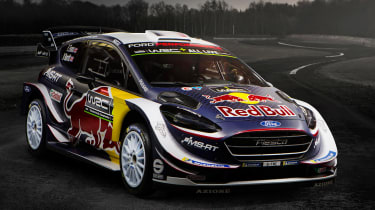 After a spectacular 2017 season that saw the introduction of a new generation of significantly faster cars and nearly every works driver in the running for victories, the FIA World Rally Championship begins its 2018 season this weekend with the notoriously unpredictable Rally Monte-Carlo. After considering retirement, reigning champ Sebastien Ogier is back to defend his title in an M-Sport Fiesta, now with increased Ford backing.

He faces a barrage of competition from Toyota, Citroen and Hyundai’s impressive driver line-ups – and from his own team-mate, Welshman Elfyn Evans, who should be on a roll after taking his maiden WRC victory on 2017’s Wales Rally GB. 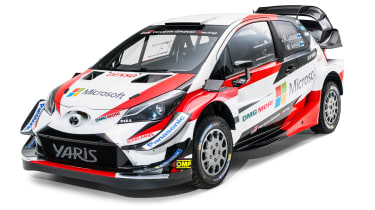 Toyota hit the ground running withits WRC campaign in 2017 thanks to Jari-Matti Latvala’s triumph on Rally Sweden – which was only the second ever event for the new Yaris WRC.

A second win would follow on Rally Finland, this time courtesy of rising star Esapekka Lappi, who along with Latvala remains with Toyota for 2018. Joining the Finnish pair is Estonian Ott Tanak, who moves over from M-Sport, having also won in 2017.

Reflecting on last season, Latvala said: “It was a surprise to win early on, but we had some technical issues later in the year that cost us a lot of points. It was our first year and you have to expect this. It was still a learning year, so I tried to be realistic. We know which areas to improve and we’ve learned from those issues, so we’re ready and confident now for 2018.”

Tanak, meanwhile, feels Toyota was his best option of mounting a world championship challenge in 2018. “They did a really good job in their first year,” he said. “I can see how much potential there is here.

“I just need to get used to the team. Our preparation has been good so far. I already feel very welcome and the car development is going in a good way.” 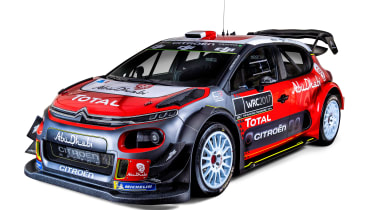 Citroen goes into 2018 with a new team principal at the helm, following Yves Matton’s departure to become the FIA’s new rallies director. The brand has promoted from within, elevating former customer racing boss Pierre Budar to head up the works squad.

In the cockpit, Northern Ireland’s Kris Meeke is the only driver contesting the full season and will be looking to build on his two victories from 2017.

“Last year for us was a struggle at times, but the underlying speed was there; we proved the capability of the C3 on numerous rallies,” he said. “We won two events and could have won one or two more, so hopefully the parts we can introduce in the first few rallies of 2018 can help us be more consistent and challenge for the title.”

The second C3 will be driven by Irishman Craig Breen on 10 of the 13 rounds, with Citroen’s nine-time champion Sebastien Loeb coming out of retirement to drive the second car in Mexico, Corsica and Spain.

Former Citroen works driver Mads Ostberg has also signed a deal with the team for Rally Sweden and could yet add further rounds to his programme, while the UAE driver Khalid Al Qassimi looks set to make selected outings with the French squad during this year as well. 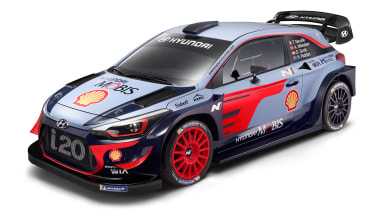 Belgian Thierry Neuville was Ogier’s closest challenger in 2017, but he’ll be kept on his toes this year by new Hyundai team-mate Andreas Mikkelsen.

The Norwegian ace won rallies with VW before the brand pulled out of the WRC in 2016; during 2017 he made appearances in the WRC2 category with Skoda and the WRC with Citroen, before signing with Hyundai for 2018.

“I feel I’m in the best place possible to fight for the championship and I’m very comfortable in the car; we have the possibility to fight for the title,” Mikkelsen said ahead of the Monte.

For his part, Neuville sees 2017 as a missed opportunity, having scored the most stage wins and led the points standings at the half-way point, but still losing out to Ogier in the end.

“2018 should be a great opportunity too,” he said. “Ogier is still the man to beat, but it’s getting closer and closer. The cars are pretty equal, which makes it easier to be always fighting for wins and should make the championship very close.”

Hyundai has retained Spain’s Dani Sordo and New Zealander Hayden Paddon, but for just seven rallies each in 2018.

Rally Portugal in May is the only round that will see all four i20 WRCs in action on the same event.

Ford: effort ramped up for Ogier 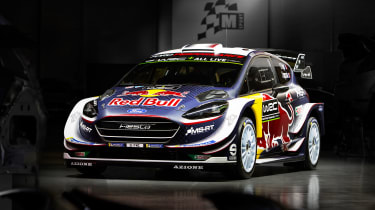 Sebastien Ogier was either going to be driving a Fiesta in this year’s WRC, or he was going to retire. But with M-Sport having run essentially as a privateer in 2017, the Frenchman wanted more support from Ford to be confident for his title defence – and that’s exactly what he’s got.

While the Cumbria-based team isn’t quite back to a full works effort, it has far more official backing this season, as Ford’s new motorsport chief Mark Rushbrook told Auto Express: “What we really want to do this year is use the technical tools we have at Ford Performance to keep that car at the front. We want to get everything we can out of the engine, the aero, the chassis and give the drivers and team the best car they can have.”

Ogier is cautious in predicting his form this year. “Sometimes I wasn’t as quick as I wanted in 2017, so we have an interesting challenge ahead of us,” he said. “We want to keep working hard developing the car. Every team has a chance right now: every car can be a winner and they all have strong drivers.”

And after taking his first WRC victory at last year’s Wales Rally GB, Welshman Elfyn Evans is unfazed by the daunting job of being Ogier’s team-mate in 2018. “The win left me wanting more; it has put me in the frame of mind to go to any rally with the aim of winning,” he said.

“But by all means it won’t be easy – as we saw the competition was very strong last year.”

It’s another globetrotting year for the series, which touches down in Britain in October.

Who do you think will win the 2018 World Rally Championship? Let us know below...