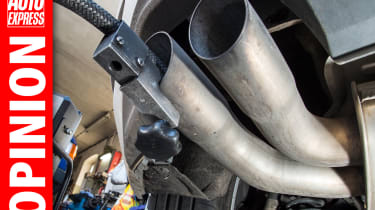 We’ve been constant critics of the way official emissions and fuel economy tests have been carried out. The NEDC (laughably standing for New European Driving Cycle) tests are outdated and unrepresentative – and have been for years – so we’ve welcomed the introduction of the supposedly more real-world WLTP/RDE (World Harmonised Light Vehicle Testing Procedure/Real Driving Emissions) tests that include on-road assessments and, we’re promised, will be rigorously checked.

Yet only last week, we reported on Mercedes’ testing specialists who told us that if we’re all expecting everything to be fixed by the new testing programme, we could be disappointed. There are still loopholes in the regulations, they said.

• Real world emissions tests: everything you need to know

By September, every new car that is sold will have to be tested to WLTP/RDE standards – a good thing, surely? Absolutely. But with every test taking ‘twice the effort and twice the time’ according to Mercedes, and figures having to be made available for every version of every car (including options), there’s an enormous amount of work to do, costing a fortune.

Bizarrely, our taxation system and the EU’s target for every car maker’s ‘fleet average’ CO2 figure to be 95g/km by 2020 are both measured on old NEDC figures. Thankfully, that doesn’t mean two tests for every car – there’s a computer programme called CO2MPAS to produce NEDC stats from WLTP tests.

Don’t get me wrong, I’m not feeling sorry for an industry with a poor record on emissions testing. But this is another example of regulators not really engaging with experts. As one insider told us this week, the cost of testing and meeting targets will have an effect on prices, while some models could disappear from showrooms altogether. So less choice and higher prices. I’m not sure that was the politicians’ aim.

New buyers of the Toyota Prius hybrid will have to pay the congestion charge, after a new emissions test moved its official CO2 output above 75g/km…