Fast & Furious is one of the biggest movie franchises in the world, but does it translate to a live action show? 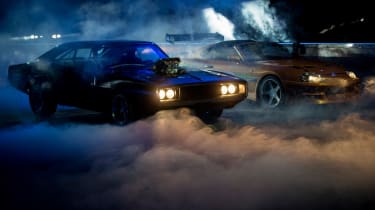 Previously, we took you behind the scenes to reveal how the new Fast & Furious Live show was being put together, and in January, an incredible four years of planning came to fruition as London’s O2 Arena played host to the event. So we went along to find out whether it had all been worthwhile, and see if there were any opening-night nerves.

The show includes live-action street racing, plenty of tyre smoke and even part of a submarine. But before all that, the night begins with Fast & Furious star Vin Diesel himself sharing an opening monologue about the value of family – a core theme throughout the eight movies. Diesel’s speech ties in nicely with the next stage of the show, where all of the leading lights from the films appear on screen, including the late Paul Walker, whose image elicits a stirring response from the crowd.

From this point audience members are taken on a journey by street racer Sophia Diaz (played by Elysia Wren) and Diplomatic Security Service (DSS) Agent Dawson (played by Londoner Mark Ebulué), who team up in a combined effort to hunt down the plot’s mysterious supervillain. To prepare the crowd, the cast takes us on a retrospective recreation of some of the films’ most iconic scenes.

The action is played out in a set of limited dimensions, but it’s augmented by a complex combination of 3D projection mapping on the backboard and floor to give the impression of both space and speed. The story then meanders between other iconic scenes until the audience is brought into play, encouraged to design its own street racer. This participation is brought about via a set of coloured cards, which are on the crowd’s seats as they sit down before the show. These cards are used as voting tools to determine various elements of a modified Mitsubishi Lancer Evolution.

One of the most dramatic performances then takes place – a technology-filled recreation of the opening street race from the first sequel, 2 Fast 2 Furious. Four seemingly white cars, namely a Honda S2000, Mazda RX-7, Nissan Skyline and Toyota Supra, enter the arena. After the traffic lights change, the cars suddenly start to glow with their liveries from the film, courtesy of a ‘skin’ of LED lights. In a breathtaking display combining exceptional driving and technical calibration, the fast-paced street race is reprised right in front of the audience’s eyes. 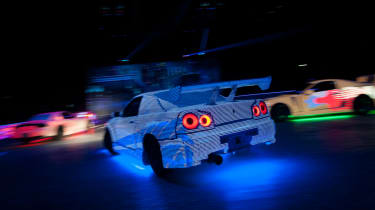 The spectacular scene doesn’t end there, though, because each of the cars interacts with the 3D projection mapping, adopting new liveries and eventually finishing in a retina-searing glittery finish that stuns the crowd. The effect is unlike anything seen before, and is made possible only by the LED technology and the 3D projections that have been developed by the team behind Fast & Furious Live.

The show’s head choreographer and artistic director, Colin Sangster, says the complex special effects have been planned from the outset as an important element of the show, and allow him to use the confined arena space to a greater extent.

Other familiar sequences include the iconic chase scene from the fifth film, in which two Dodge Chargers hurtle through the streets of Rio de Janeiro towing a large bank vault. From the latest film, an orange Lamborghini Murciélago evades a military submarine in the Russian Arctic. The use of props is a somewhat curious addition to the show at this point, with a torpedo trundling around on the stage floor in pursuit of the target car. 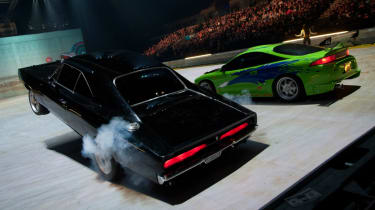 The show is performed flawlessly, and is a testament to the work and skill of Fast & Furious Live’s stunt team. They may be confined to a relatively small stage, but their ability to cram so much metal between the four walls without coming together is an impressive feat. Lead stunt driver Chris Burns has done a fantastic job putting the team together, and after we met many of them during rehearsals, it’s good to see them showing off their skills in front of the crowd, even though the tyre smoke becomes quite pungent.

If the Goodwood Members’ Meeting is a must-do on your annual motoring calendar, chances are Fast & Furious Live isn’t. But then you’re unlikely to be the show’s target audience. Still, as an example of explosive and exciting live action based on a narrative recognisable from one of Hollywood’s most successful movie franchises ever, Fast & Furious Live undeniably hits its target.

Thinking of getting in on the Fast & Furious action? Then check out the best cheap fast cars to buy in 2018.