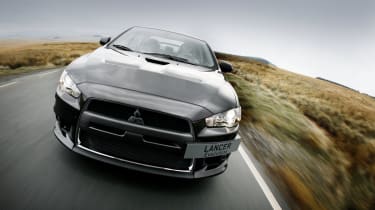 Every brand needs a car to get the enthusiasts excited, and the Mitusbishi Lancer Evolution X is just that model. It bears a passing resemblance to the Lancer saloon, but this is the fastest and most extreme vehicle Mitsubishi sells. The range-topping FQ-360 model has 359bhp and 492Nm, and thanks to a sophisticated four-wheel-drive system can sprint from 0-60mph in only 4.1 seconds. The four-door body and decent-sized boot mean the Evo X is far more practical than other cars with similarly high performance, but the extremely stiff suspension means the Evo X can be quite tiring to drive when you're not using its full potential.

It’s the way the Evo X drives that’s key to its appeal, and the 2.0-litre four-cylinder turbo engine is at the heart of the package. There’s not much in the way of character, as it becomes strained at high revs, but it makes up for this with sheer performance. The huge amount of grip on offer from the sophisticated four-wheel-drive system means it can sprint from 0-60mph in less than five seconds. It could do with a longer top gear though, as it becomes irritatingly noisy at motorway speeds. Still, get on a twisting back road, and the Evo X comes into its own, as the sharp steering, stiff suspension and excess of grip means drivers really can make the most of the devastating performance.

Almost everything about the Mitsubishi Evo X makes it an expensive car to enjoy. Servicing has to be completed every 10,000 miles, although the first three years can be covered by a service pack for £650. The official claimed combined economy figure for the more powerful Evo X FQ-360 is less than 20mpg, and even the Evo X FQ-330 struggles to better 26mpg. CO2 figures are equally depressing, and both models sit in the top tax bracket, requiring owners to spend £460 annually on their tax disc. Insurance is high and residual values aren’t as good as some of its competitors – in fact, the only thing on the Mitsubishi’s side is the relatively high standard equipment list.

The Evo has always been an aggressive looker, and the Evo X is no different. An aggressive nose, huge spoiler, bulging wheelarches and various gaping vents make it look every inch a road going racer. Look beneath the sporty touches though, and you can still see the Lancer saloon DNA shining through. Regardless, it’s a sharper looking tool than the rather more bloated Subaru WRX STi. The interior isn’t quite as dramatic, with cheap and uninspiring plastics and design, although this is no worse than in the WRX STi. Standard kit levels are generous though, and the Evo X comes with sat-nav, climate control and a hard drive to load music on.

Considering the performance on offer, the amount of practicality offered by the Mitsubishi Evo X is staggering. There’s four doors, a spacious cabin and a 400-litre boot. Admittedly the rear seats don’t fold, in a bid to improve rigidity, and the boot is actually quite shallow. The small 55-litre fuel tank and poor economy does hamper long distance trips though, requiring frequent fuel stops. Still, the four wheel-drive system should ensure that even when the weather turns nasty, those travelling in a Mitsubishi Evo X will stand a decent chance of making it to their destination.

Although the Evo X model hasn’t been tested directly, the Lancer on which it’s based on received five stars from the Euro NCAP program. All Evo Xs come with four-wheel drive, stability control, seven airbags (including one for the driver’s knees) and Isofix child seat mounting points. The Driver Power survey has never been a strong point for the brand, finishing in the lower half of the table, though dealers have fared better. 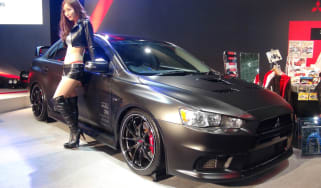 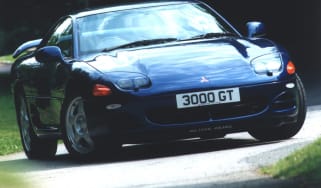 Mitsubishi is looking to replace the EVO not with a saloon, but a hybrid 2+2 coupe
Visit Mitsubishi Evo X FQ-400 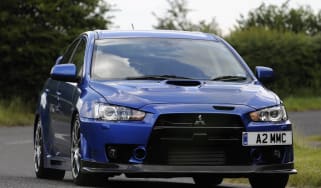 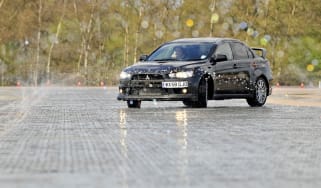 Final report: We visit one of UK’s top test tracks to see just how capable our Lancer is
Visit Evo FQ-360: 2,990 miles 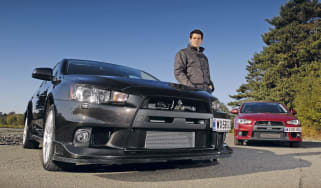 First report: We’ve upgraded to even faster Mitsubishi – but is it a better car to own?
Visit Vauxhall VXR8 vs Mitsubishi Evo 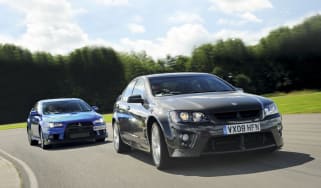 Vauxhall’s VXR8 has been fitted with a more powerful V8 engine. So, does that make the new LS3 a greater four-door thriller than Mitsubishi’s Evo X?
Visit Mitsubishi Evolution X: 5,249 miles 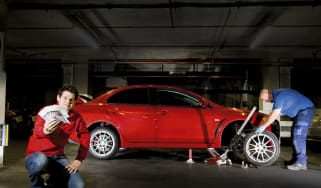 Second report: We knew our Evo was costly, but an early tyre change was a major surprise.
Skip to HeaderSkip to Content