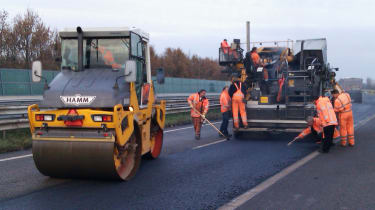 Local authorities are struggling to attract contractors to bid for road projects as funds are diverted in favour of strategic roads, an industry expert has claimed.

James Haluch, managing director of highways for construction giant Amey, highlighted that for every £1 spent on local roads, £52 was spent on strategic roads. Haluch warned this “massive” disparity meant local authorities are “in a very literal sense, struggling.”

• Motorways get 52 times more funding per mile than local roads

“We’re seeing that local authorities are struggling to get contractors to bid,” said Haluch. “Some examples: a shire county, big maintenance contract, two bidders. There’s another example with just one bidder.”

Those difficulties come, Haluch said, even though strategic roads are “carrying one third of all vehicles, two thirds of HGVs”, and “100 per cent of all vehicles at some point.”

Part of the issue, Haluch said, was that some councils were expecting contractors to submit complex bids for small projects: “The cost of [a full tender process] would actually have been higher than the probable profits you would make on the job.”

That process contrasted sharply, Haluch said, with major projects from Highways England, which controls 4,300 miles of motorways and major A roads: “With Highways England [the tendering process] is quite quick, there’s a lot of repetition, contractors know the system pretty well.”

Not all local authorities were struggling though, Haluch added: “You’ve got local authorities who are focussing hard to get the basics right – they haven’t got the money to mess about… If I pick out one authority who I think really typifies that forward thinking, that would be Staffordshire.”

Haluch also cited Cornwall as another authority displaying good practices, saying it was “playing the long game”, before adding: “They’re not in it for a quick buck, because they know, if they save money today, they’ll pay for it in the future.”

• London stops all “non-essential” road improvements due to cuts

Councils could make road projects more attractive to contractors, Haluch said, by clubbing together when putting works out to tender: “Local authorities… and larger regional bodies, there probably is a part for them to play, for local authorities to try and do joined-up procurement.”

Haluch’s comments come as new research from the AA reveals just 15 per cent of motorists feel local roads are maintained to a high standard, yet 66 per cent say motorways are well kept. The AA study also found almost half of motorists (49 per cent) would support a small increase in VED, or road tax, in order to improve local roads.

Commenting on the survey, Edmund King, president of the AA, said: “Road users are getting more and more frustrated with the state of local roads, with moon-like craters troubling drivers, cyclists and motorcyclists on a daily basis.”