‘If councils were more proactive, potholes wouldn’t be so dangerous’ 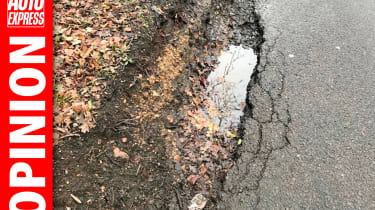 Ever hit a pothole that’s damaged your car? I have. It happened on a road near my home, ‘maintained’ by Buckinghamshire County Council, and cost me £113 for a new tyre.

• Guide: how to claim for pothole damage to your car

So what should you do if you suffer damage? Claim, as I did. But my claim has just been rejected under Section 58 of the Highways Act. It provides a defence if councils can prove they have taken reasonable care to properly maintain the highway.

Bucks County Council says it inspected the road 10 days before the damage was caused by the pothole in the picture above, so Section 58 applies. Do you think that pothole appeared within 10 days? I certainly don’t. But the Council told me: “We cannot publicly discuss the details of specific cases; however each claim is investigated and considered thoroughly before reaching a decision.

“When the ground temperature fluctuates just above and below zero degrees centigrade (as it has done frequently this winter), it is very possible for a defect to form within 10 days and even overnight. This is due to the damaging effect the ‘freeze-thaw-repeat’ process has on the road surface.”

• Pothole-related breakdowns surge by 11 per cent

Right… But at least the Council thought it was worth repairing after I’d claimed as the pothole responsible was filled within a couple of weeks.

So what next? Apparently I can seek independent legal advice. Really? I shouldn’t have to take my local council to court. Surely councils exist to provide services to residents, not fight with them.

If the many councils up and down the country were more proactive, looking after roads in the first place, we wouldn’t have a pothole problem that’s at dangerous levels.

In the future, smart vehicles could report potholes automatically. Read all about it here…