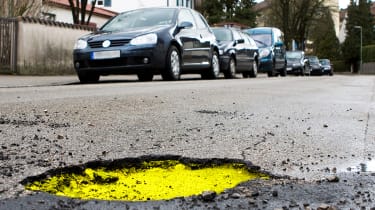 Sunflower oil could be the key to repairing potholes by ‘self-healing’ cracks on the road before they deteriorate further.

Highways England is currently trialling the use of sunflower oil capsules in preventing potholes from forming. The technology was first developed by Dr Alvaro Garcia, an engineer with the University of Nottingham and his team at the Nottingham Transportation Engineering Centre.

Sunflower oil makes the asphalt mix less thick, meaning its more likely to be able to flow into cracks. When roads start to crack, the capsules break open and release the oil within, softening the asphalt around it. This helps the asphalt ‘stick’ back together, effectively filling in cracks and preventing small defects from deteriorating further.

There's currently a 14-year backlog of pothole repairs in the UK, estimated to cost £11.8 billion according to the Asphalt Industry Alliance. Dr Garcia and his team believe that by using sunflower oil capsules, future roads will be less susceptible to potholes. They estimate the tech could increase a road's lifespan by at least a third from 12 to 16 years.

Highways England is currently said to be trialling sunflower oil capsules, and if found successful the tech could be rolled out across the road network.

Dr Garcia said: “Our preliminary results showed that the capsules can resist the mixing and compaction processes without significantly reducing the physical and mechanical properties of asphalt and they also increased its durability. More importantly, we found that the cracked asphalt samples were restored to their full strength, two days after the sunflower oil was released.”

Senior pavements advisor for Highways England Robin Griffiths said: "We know road users want good quality road surfaces, with fewer potholes and not as many roadworks disrupting their journeys. This self-healing technology could give them that and offer real value for money. So far the Nottingham University research we have funded is showing real potential in how easy it is to mix and apply, as well as being sustainable and environmentally friendly."

Is sunflower oil the answer to our pothole crisis? Tell us in the comments below...