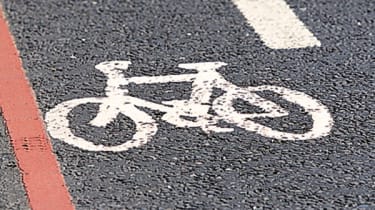 Motorists and cyclists could soon face new road rules, after the Department for Transport (DfT) announced a call for evidence on cycling, and funding for three bike safety projects.

One possible area the Government could consider is setting a minimum distance for drivers overtaking cyclists.

The Highway Code currently says drivers should give cyclists “plenty” of space and “at least as much room as you would when overtaking a car”, but ministers have previously said they were “interested” in introducing a mandatory minimum passing distance.

Back in 2016, then Transport Minister Robert Goodwill said, following the introduction of minimum passing distances in South Africa, that ministers “remain interested in the change and are keeping it under review.”

And in February this year, police in Cambridgeshire launched ‘Operation Velo’, which recommended a passing distance of 1.5 metres. The operation saw cycle-mounted officers on patrol to catch drivers not giving cyclists enough room, with motorists facing fines of £100 and three penalty points for careless driving.

Another possible new rule would tackle the danger caused by drivers opening car doors into the path of cyclists. Motorists in the Netherlands are taught to open car doors using the 'Dutch Reach', which involves using the hand furthest away from the door to open it, essentially forcing drivers to look over their shoulder for passing cyclists.

Approximately 100 cyclists are killed every year in the UK, while 3,000 are seriously injured. The danger posed to cyclists by other road users is considered one barrier to getting more people on their bikes, which the Government wants to do as part of its ‘green revolution’.

Cycling Minister Jesse Norman said: “We need to become a nation of cyclists, and this government wants to make cycling the natural choice of transport for people of all ages and backgrounds.

“We are determined to make cycling safer and easier across the country, and we are continuing to invest. Today we’re announcing an investment of £100,000 each in 3 innovative cycle safety projects, in addition to the recent £7 million of funding to improve cycle safety. This is all part of the first-ever statutory Cycling and Walking Investment Strategy.”

Cyclists themselves could also face new rules, following the publication of an independent report that found there was a strong legal case for introducing a new offence covering death by dangerous cycling. That review follows the death of Kim Briggs, a mother of two who was knocked down and killed by a cycle courier riding a modified race bike with no front brakes.

There’s no reason why drivers and cyclists can’t co-exist. Combine the best of both worlds with these towbar mounted bike racks…