‘The opulence on display at Geneva was simply breathtaking’ 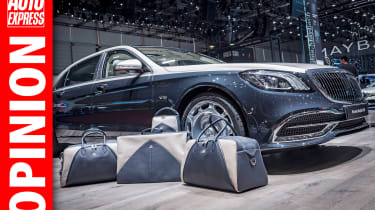 There are always obvious themes at the Geneva Motor Show and aside from the predictable push towards electrification, two things stood out clearly for me as I walked round the stands and spoke to execs at last week’s event.

Firstly, there was a great deal of uncertainty. On Brexit. On Donald Trump’s proposed trade tariffs. On the future of diesel, with some wildly differing views being offered. And on Vauxhall, with PSA boss Carlos Tavares again stating: “We need to significantly reduce manufacturing costs.”

Secondly, the opulence on display was simply breathtaking. Geneva has always been a show that lends itself to this, being based in one of the world’s main financial centres. But this year was something else, with an array of new models that wouldn’t look out of place in an oligarch’s fantasy garage.

There was a new Mercedes Maybach S-Class. A new Bentley Bentayga plug-in hybrid. An Aston Martin Lagonda concept that points to all-electric rivals to take on Bentley and Rolls-Royce. An even more extreme Bugatti Chiron Sport. And most mind-boggling of all, the limited-run Range Rover SV Coupé, which carries a price of £240,000. Extraordinary, really, but I’ve no doubt it’ll sell out.

What all this demonstrates is that no matter the uncertainties that remain in the world you and I inhabit, the top end of the market is immune to reality. There appears to be an insatiable desire among the very richest for new cars, and an obvious willingness for manufacturers to provide them.

Surveying the excess, I left with one concluding thought; I don’t know how far this luxury car arms race can go. And yes, some of it is a bit tasteless.

But Geneva showed the world’s elite have never been better served for new cars. And while out of reach for most of us, they certainly provided a thoroughly compelling spectacle.

What was your favourite car of the 2018 Geneva Motor Show? See if it made our hand-picked list…