Speeding drivers could get warnings instead of fines 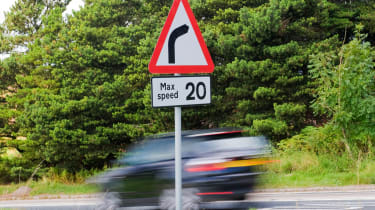 Speeding motorists could soon be given written warnings instead of speeding tickets under new plans from Police Scotland.

The proposals would see drivers caught speeding by police officers in 20 and 30mph zones given a written warning, which would expire with no action after three months if no further speeding offences were committed in that time. Motorists caught speeding again within three months would receive points and a fine.

The system would not be applied to drivers caught by speed cameras, and those receiving a warning would not have to tell their insurance company. Estimates put the number of drivers who would qualify for a warning at 18,000 each year.

Police Scotland’s head of road policing, Chief Superintendent Stewart Carle, told The Scottish Mail on Sunday: “If you have an opportunity to say ‘Speeding is one of four fatal factors and we’re not going to prosecute on this occasion, we’re not going to give you a fine, will you accept this warning?’, I think most people will say ‘Yes, absolutely’.” Carle said such an approach would allow prosecuting authorities to focus on more serious cases.

Police Scotland are also said to be considering the introduction of speed awareness courses, which are offered in England to drivers caught breaking limits by certain amounts, but are not available north of the border.

If given the green light by Scotland’s Crown Office prosecution service, the warning system could be in place within a year. A Crown Office spokesman cautioned, however, that “no decision will be made on… speed awareness courses and their possible relationship with alternatives such as warnings until the findings of the evaluation report have been considered.”

Read our guide to speeding fines and how to appeal them…