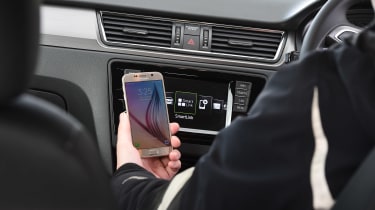 Smartphones could soon be used to unlock and start cars, after a consortium of car makers and tech companies agreed a new set of standards for smartphone car keys.

The Car Connectivity Consortium (CCC) - which counts Volkswagen, BMW, Hyundai, Apple, LG and Samsung among its members - has announced ‘Digital Key Release 1.0’ specification, which sets out how “a robust ecosystem” will allow drivers to lock, unlock and start their cars from compatible smart devices.

Tesla owners can already use a dedicated app instead of a key to access and start the Model S, Model X and Model 3, but the CCC’s new set of protocols will create an industry-first “standardisation solution”.

The CCC says the new system will assure “the highest state-of-the-art security level for vehicle access.” The technology is the product of the near-field communication (NFC) protocol, and differs from current keyless entry systems which have proven vulnerable to hackers and car thieves in some instances.

The 1.0 specification has generated “extensive interest from automotive and smartphone manufacturers”, resulting in work beginning on the “Digital Key Release 2.0 specification”. This second iteration is under development by all of the parties responsible for the first specification, plus Audi, General Motors, and a number of other companies.

An spokesperson from Volkswagen said the company “has supported and contributed to Digital Key Standardization activity of CCC from the first day”. Audi said the CCC protocols will “lay the building blocks for innovative services”, while BMW said it would deliver “a superior user experience” to customers.

Worried about you car being stolen without its key? Here’s how to avoid keyless theft…