Trump's tweet prompts fall in value of European car companies' shares; EC chief says EU will have "no choice" but to react to tariffs 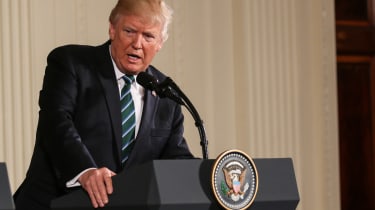 The EU has said it will retaliate if Donald Trump follows through on threats that America will impose a 20 per cent import tariff on European cars. Jyrki Katainen, the EU Commission's vice president of jobs, growth and investment told French newspaper Le Monde that "If they [America] decide to raise their import tariffs, we'll have no choice, again, but to react".

Katainen added, though, that: "We don't want to fight [over trade] in public via Twitter. We should end the escalation". His comments come after Donald Trump threatened to levy import tariffs of 20 per cent on European cars last week. The US president made the warnings on Twitter, claiming that if European “Tariffs and Barriers are not soon broken down and removed” America would “be placing a 20% Tariff on all of their cars coming into the US.”

Cars made in America and imported to the European Union countries are currently subject to import tariffs of 10 per cent, yet goods traded from Europe to the US only face a 2.5 per cent levy. 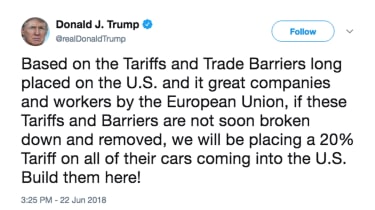 While the European Commission has previously voiced a desire to “remove these duties and other barriers to trade”, Trump's frustration at import boundaries appears to have provoked his latest warnings.

European automotive stocks fell an average of 1 per cent following Trump’s tweet, with BMW shares down 2 per cent, Mercedes down 1.4 per cent, and Volkswagen down 1.1 per cent, according to Thomson Reuters data.

The remarks from the president follow previous threats reported in the German media that Trump was threatening to impose a 25 per cent import tariff on European luxury cars.

Daimler, the parent company of Mercedes, issued a profit warning earlier this week following concerns over Trump’s trade disputes with China, which are set to see US import tariffs of 25 per cent placed on certain Chinese goods. This led to to fears China would impose retaliatory tactics, making US-made examples of the Mercedes GLE-Class, GLS-Class and C-Class more expensive to export to China.

Trump’s latest utterance is also thought to be related to fresh trade tariffs imposed by the EU on US goods like motorcycles, jeans and whiskey, themselves a reaction to US tariffs on EU steel and aluminium.

What do you think the future holds for European car imports to the US? Let us know in the comments...