Training the car mechanics of tomorrow 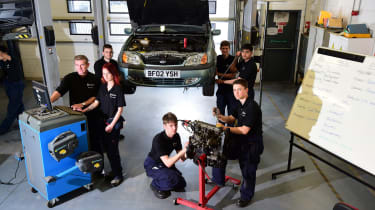 Few of us think twice about garages and the role of the mechanic. Without them, however, our cars would quite literally grind to a halt.

But the automotive sector has been undergoing something of a staffing shortfall in recent years, with as many as 5,000 empty roles across the industry, and a 61 per cent drop in apprenticeships since a new levy was introduced in May 2017. By 2020, the skills gap could be as big as 50,000 in the industry, according to the Society of Motor Manufacturers and Traders (SMMT).

Training facilities for the mechanics of tomorrow, like the one run by Buckinghamshire College Group at its campus in Aylesbury, are therefore vital if Britain is to keep moving in the future. So Auto Express has gone back to school, heading to Aylesbury to get first-hand experience of how mechanics are made, what motivates them and what hopes they have for years to come.

Steve Bicker, the centre coordinator, tells us the course offers a clear path to employment and a career. “Students need to be keen, and have to have an ambition to work in the trade,” he tells us. “Most of them go off to apprenticeships, some into main dealer workshops. We actually had one student going to work for British Airways as an aircraft engineer.”

The college offers Level 1 Diplomas in Transport Maintenance, and Level 2 and 3 Diplomas in Vehicle Maintenance and Repair. Students typically start with either the Level 1 or 2 qualifications, which are both a year long, but can jump straight into the Level 3 course if they have four A to C grade GCSEs – although because this course is three years long, Bicker admits it requires a “big commitment”.

But what about the students? How committed are they to a career in the workshop? After chatting to Khalid Zaman, who is nearing the end of his Level 2 Diploma, we’d say the answer is very. 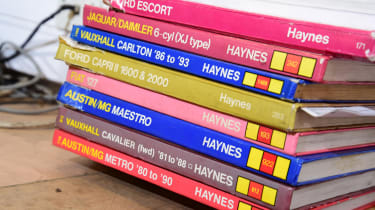 “When you fix something, there’s a joy to it,” he tells us. Khalid is removing the head from a 1.9-litre Volkswagen TDI on a ‘rig’ – a mobile stand that allows the engine to be turned and rotated for easy access.

“Modern engines are so well engineered they’re a pleasure to work on, and this is a really good one,” he adds enthusiastically. “It’s an old unit, but there is absolutely no pitting or scoring inside the cylinders.” Khalid speaks like a born mechanic, telling us he spent his childhood taking things apart and putting them back together.

While most of the students we speak to have their eyes on apprenticeships, that’s not the case for all of them. One tells us he’s taking the course to learn skills for his own personal use, while another, Andrew Medhurst, wants to become a mechanic in the Royal Marines. “Most of the skills I learn here will be transferable,” Andrew says. “It’ll be on a bigger scale in the military, but the principles will be the same.” 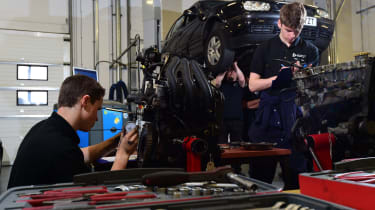 And although the majority of the learners we meet are young lads, there are a couple of female students taking Diplomas, too. Rachel Swain, for example, races go-karts in her spare time, and also works as an apprentice mechanic for a local Classic Sports Car Club (CSCC) racing team, which runs a Lancia Delta Integrale and a Holden V8. She tells us she has a lot of the knowledge already, but will get the qualifications to prove that at college. “I can apply the things I learn in the garage to the track workshop, and use the skills I learn in the garage to help me in the classroom,” Rachel explains.

We also speak to Kayleigh Sinsbury, who wanted to be a mechanic from a young age. “Everyone told me no garage would want to take on a female mechanic,” she says. That all changed when Kayleigh had a conversation with a local garage boss. “He said it didn’t matter whether I was male or female, he would hire me if my skills were good enough.” Kayleigh tells us college has been empowering. “I didn’t know anything about mechanics when I started this course, but now I feel like I could do anything.”

For the industry to survive and thrive in the long run, it has to attract talent like Kayleigh. As such, Buckinghamshire College Group has recently also opened up a new facility at its Wycombe Campus that offers additional courses for budding technicians. The hope is that with more courses and locations, more young people consider a career in the automotive industry.

Stuart Carter, a course workshop technician, tells us the safety of his students is always paramount. “The most dangerous thing in the workshop environment is crushing,” he says. “If someone gets stuck under a car, they’re probably not going to make it. So we start doing ramp, jack and axle stand training before we let students near a car.” 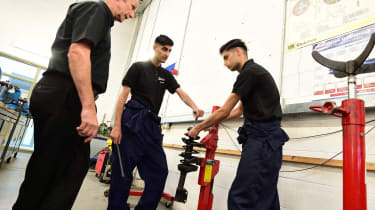 Steve Haines, a motor vehicle lecturer at the college, explains some of the advantages college training has over starting in a workshop. “In a garage, you’d be changing bulbs and wipers, making tea and sweeping up,” he says. “Here, we start from the inside out, starting with taking the wheels off, then moving on to brakes, understanding ABS.”

There are six cars in the workshop in various stages of mechanical undress, and students can even bring in their own cars to work and train on. A VW Golf is one such car, and students are learning how to perform a four-wheel alignment check, which it sorely needs after having new track rod ends fitted. But we can’t help noticing all the cars in the college’s workshops are relatively old, and have conventional petrol and diesel engines.

“We priced up a hybrid rig,” Steve Bicker tells us, “but at £48,000, it’s a big investment. We’re hoping to spend less on a £10,000 used hybrid car, probably a Toyota Prius.” Bicker says the college is hoping to partner up with a manufacturer or garage to get hold of a hybrid or EV, but he adds that Level 3 students get hybrid experience when they’re in their work placements. This is vital because figures obtained by Auto Express in the past showed just over one per cent of the UK’s technicians are qualified to work on electric and hybrid vehicles.

Steve Haines is under no illusions that working life will mirror college, and he prepares his students for that. “I try to drum into the students that customer relations are very important,” Haines says. “If you give poor service, that customer will go away and tell several of their friends; but if you give good service, people will come back to your business for years.”

There’s another significant advantage of learning the trade at the college, too, as Steve Bicker explains: “We have heating here; lots of workshops don’t!”

It isn't just technicians which have EVs in their future motorists do too. Read our feature where we find out if plug-in cars can still be fun.