‘It’s a significant time for the future of our cars’

After the Jaguar I-Pace won our 2018 Car of the Year award, Steve Fowler thinks the future of electric cars is looking brighter and brighter 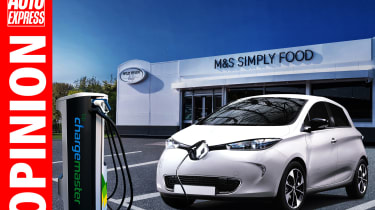 Choosing our Car of the Year is the toughest decision we have to make each year. It has to be a model that genuinely sets new standards in its class or even defines a new one. And it’s a decision where cold, hard analysis wins through and any sentiment has to be set to one side.

This year’s winner is genuinely groundbreaking – not least in its all-electric powertrain - but to let you into a little secret, its closest rival for our overall title was another game-changing electric car...

So we’ve already reached an age where affordable and desirable electric cars can go for hundreds of miles on a single charge. And we know that the choice of electric cars is going to increase as rapidly as these cars accelerate – our Car of the Year may well be a trailblazer this year, but things are going to get very tough for it very soon!

Range anxiety may well soon be a thing of the past then. And we also discovered this week that finding somewhere suitable to charge is likely to become a whole lot easier, too. Oil giant BP has just revealed it’ll be buying the UK’s leading provider of charging points and EV infrastructure, Chargemaster.

For its £130m investment, BP will get a rapidly-expanding network of chargers that already numbers well in excess of 6,000. However, even more exciting is the plan to put fast-chargers, capable of adding 100 miles-worth of charge in just 10 minutes, on to BP’s forecourts up and down the country. That, too, will be game-changing.

For every person like me who’s excited by the onslaught of electric cars, there are plenty who refuse to believe it can genuinely play a part in the future of motoring. To those people I have a simple message: go and try one! I’m confident that we’ll look back on this time and realise this is when electric cars came of age.

What are your views on electric cars? Let us know in the comments section below...