Ageing infrastructure causes road deaths, so we check out the cutting-edge road safety kit – from lamp posts to barriers for roadworkers 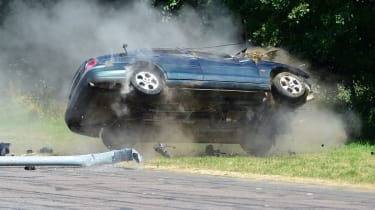 Every now and then a practical demonstration has a far better impact than a highly detailed engineering report packed with facts. Ramming two cars into street lamps to show how a simple change of construction can save lives is an example of this.

One of the lamp posts is a conventional steel design, found on roads and motorways around the UK; the other is an aluminium, passive safety post that’s slowly becoming more common across the network.

In the first collision, with the original lamp, the driver and passengers would all have died, while in the other, they would have walked away unscathed with nothing but a dented bonnet to show for their impact with the new, safer, cutting-edge design.

Britain’s roadside infrastructure is heading towards a major upgrade in terms of tech and safety. To find out what highways agencies and various tech companies have in store for us, Auto Express visited the Traffex Seeing is Believing road safety conference at Bruntingthorpe, Leicestershire.

The number of road fatalities is on the rise in the UK. In 2016, there were 1,792 people killed on our roads, a four per cent increase from the previous year and the highest number recorded by the Department for Transport since 2011.

While road accidents come in many forms, any mitigation and prevention is a step in the right direction. Upgrading lamp posts and street signs to ‘passive’ versions will help reduce fatalities and injuries from vehicles that have lost control.

“Passive safety systems have been around for years. The first passive sign post was developed in Finland back in 2002,” says Ian McDonald, national sales manager at Pole Products. 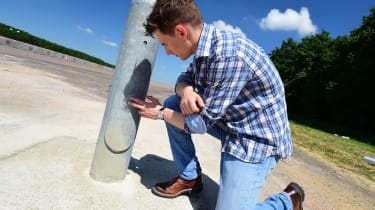 “We’re working closely with Highways England and Transport Scotland to drum up more support for passive safety technology. We’re already seeing it around high-speed roundabouts and some high-speed roads, but it’s important that local councils adopt this technology,” McDonald says.

He goes on to explain the three stages of passive safety. The first is No Energy, which doesn’t slow the car down, but breaks on impact. The idea is that drivers will be able to bring the car to a stop themselves.

The second is Low Energy, where the street lamp, post or road sign slows the car slightly, but still allows the driver to remain in control. The third, High Energy, is aimed at bringing the vehicle to an immediate stop by absorbing much of the energy of the crash. 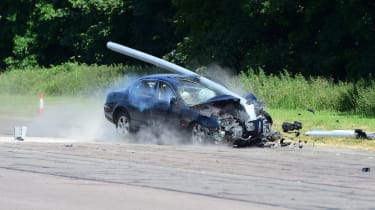 “Today, we’re showcasing the Low Energy lamp posts,” explains McDonald. “The aluminium construction allows the car to drive through the lamp post, helping the driver to maintain control.” The Low Energy post looks identical to a steel one, except the bottom has a plastic housing on which the post sits. When struck, the post will simply pop out of the housing, distributing the force of the crash elsewhere.

As a comparison, a traditional steel lamp post has been lined up. A Jaguar S-Type is accelerated (remotely) towards the steel pole at 60mph and the impact is violent and noisy. The Jag half flips in the air while the pole bends and whips at its rear. The car then spins off the road, a total wreck.

• Traffic jams are costing the UK over £37 billion a year

On closer inspection, McDonald and his safety technicians conclude: “This would have definitely been fatal. The intrusion and crash damage is severe.” The roof is squashed and the interior mangled.

Next up is the passive safety pole. Again, a vehicle is accelerated at 60mph towards the pole. This time, the Vauxhall Vectra simply drives through the pole. The lamp post flings into the air, snapping off from the plastic mount and landing on the ground, but the car continues in a straight line.

“This is the impressive bit,” says McDonald. “As you can see, even without a driver the car maintained its course. Were there to be a driver in the car, he or she could have brought it to a standstill quickly.” The damage on the Vectra is minimal. But demonstrations like this hopefully drive the point home for councils to start investing in better roadside infrastructure.” 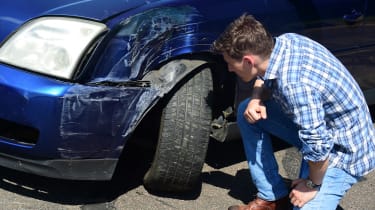 It’s not just drivers who need protection, though. Roadworkers are at risk from aggressive, inattentive motorists. Highways England data shows from July to September 2017 there were 3,500 incidents involving vehicles and highway workers, 150 of them serious. Four roadworkers were injured, as were two drivers.

There are even courses now teaching roadworkers conflict resolution management and self-defence. “One of the big dangers to roadworkers is exposure to traffic,” says Karl Simpson, in charge of innovation and business improvement at Kier Group – Highways.

Any motorway works will have hundreds of cones lining off traffic, but these don’t do much to stop a car or lorry that’s out of control. Highways England has teamed up with Kier Highways to purchase two trucks featuring 60 feet sections to protect workers. Whether the truck is stationary or being driven at low speed, the three 20-foot metal blocks act as a barrier between the traffic and workers. Any potential impact would hit the lorry, which is built specifically to withstand crashes and guard the workers. “Each truck costs £350,000, but that’s nothing compared with a serious injury to a roadworker or a fatality,” says Simpson.

One of the most hazardous jobs for roadworkers is placing temporary road markings. At present, two crew members do this on foot, with one tarring the markers and the other placing them on the road by hand. But British roadside construction firm WJ Group has created another truck to take the danger out of the task.

“We spent millions developing this truck,” says WJ Group managing director Wayne Johnston. “It’s a prototype, but we hope to see it on the roads soon.” The truck features a hydraulic pressing machine that places the green studs on the road. All the operator has to do is to feed the machine, while the driver keeps a straight line and steady speed. “The operator is protected by a cage, so even if a car strikes the truck, they’ll be safe,” says Johnston. 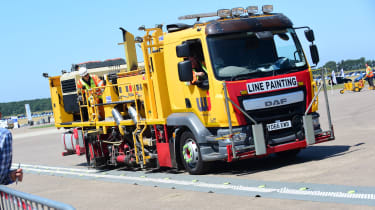 WJ Group is also innovating the central road markings. It’s created a new, dotted central reservation marking that’s not only more visible thanks to specialised reflective particles in the compound, but also grippier and less prone to aquaplaning.

“Our central reservation markings are five times more visible than standard markings,” says Johnston. “The dotted pattern allows water to drain far quicker, instead of remaining on the surface. This makes them better and safer, especially for vulnerable road users like motorcyclists. They are also grippier.” The firm is said to be trialling the tech with Highways England.

• Drivers encouraged to throw trash from cars into new bins

Technology isn’t just automating putting out road markings, though; it’s also helping keep workers safe when picking up litter from the UK network. An incredible 550 sacks of rubbish are collected from the road and roadside each day, costing taxpayers £8million a year. To speed up the process, and keep workers off the road and out of harm’s way, cleaning specialist Barber has developed the Road Rake.

This green machine is dragged behind a van on the roadside. As it goes over trash, bits of broken tyre and even debris from accidents, a system of conveyor belts and metal spinners gobbles up all of the rubbish. The Road Rake is still on trial for now, like most of these innovations, but as we’ve seen, if councils have the foresight to invest in them, they could radically improve safety on our roads and for our roadworkers.

Enjoyed this motoring feature? Then take a read of our "How have traffic police cuts hit the UK roads" article.