From tips for towing a caravan across the UK to help getting your towing licence, our towing guide explains all 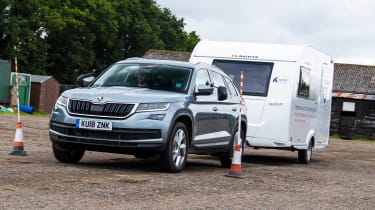 But there’s more to pulling your home from home than simply hitching it to a tow hook and setting the sat-nav. To find out just how complex it is, we joined the newly-rebranded Caravan and Motorhome Club (C&MC) in West Sussex for a day in the hot seat.

• Tow Car of the Year winners

The organisation was founded in 1907 and today represents the interests of around a million members. It has 15 centres nationwide, and over the past 30 years it has trained more than 53,000 people to safely tow their caravan around the country.

Our instructor is Keith Rogers, a dedicated ’vanner since 1988 who’s worked with the C&MC for nearly 10 years. We’re here to attempt the club’s ‘Caravan Manoeuvring’ course – a one-day, £175 assessment that sees applicants spend an hour or so in the classroom before hitching an empty caravan to their own car.

While Keith’s list of entertaining stories is longer than our arm, the purpose of the day is important. Few people properly understand the dangers associated with towing, and many are put off completely by the prospect of reversing and manoeuvring around sites. Keith has trained everyone from complete novices to people who’ve been towing for more than 45 years.

He teaches us the basics using a diecast model of a BMW X5 and a single-axle four-berth caravan. Touching on hazards such as snaking, pitching and jack-knifing, he shows us how best to load the caravan and how to properly distribute any excess weight. 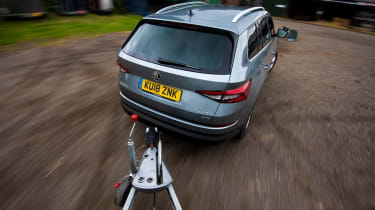 He also hammers home the importance of the car and caravan being properly matched. “Go for the smallest caravan you’re comfortable in, but the largest car you can afford,” he explains.

The club recommends that the laden caravan does not exceed 85 per cent of the towing car’s kerbweight. But it’s also worth noting that anyone who passed their test after January 1997 must keep the combined weight of car and trailer below 3.5 tonnes, unless they have had additional training.

Keith tells us a common misconception is for owners to load their caravan with heavy items such as chairs, tables and camping kit, rather than placing them in the car. As such, it’s always best to place weightier gear in the boot, rather than load it in the trailer; all caravans have a Maximum Technical Permissible Laden Mass (MTPLM) that must be adhered to.

After a couple of cups of coffee and a stint staring at the screen, we make our way outside. Here, Keith pulls a pair of square mirrors from his Land Rover Freelander: “It’s illegal to tow [a caravan] without extension mirrors,” he tells us. “And equally illicit to leave them on after you’ve unhitched.” 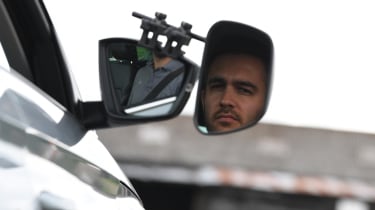 With a bit of help, we successfully secure them to our Skoda Kodiaq – the C&MC’s reigning Tow Car of the Year. The difference these mirrors make is remarkable, allowing us lots of extra vision beyond the caravan’s bulky wheelarches and wide frame.

Once we’ve set up, Keith guides us into position, from which we can hitch the caravan on to the Kodiaq’s £860 optional electrically folding tow bar. The six-point process, which includes lowering the jockey wheel, connecting the electrics and releasing the brake, appears complicated at first, but after a couple of attempts, the trailer is attached and we’re ready to go.

To begin with, Keith gets us to drive in a simple figure of eight. Granted, the empty shell doesn’t weigh very much, but it’s immediately obvious how adept the Skoda is at towing. If it weren’t for the big white box in the rear-view mirror, you’d never know it was there.

After grasping that even on full lock the car and caravan won’t collide, we’re confident enough to attempt our first manoeuvre. Keith lays out a series of cones and instructs us to do a simple U-turn – something that, on paper at least, should be intuitive to complete and relatively straightforward. But on our first attempt, we unintentionally nudge a cone as the caravan turns too early. Keith has seen it a thousand times before. 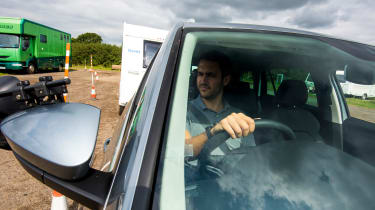 “If you want to turn back on yourself, it’s easier and safer to turn out before you turn in,” he tells us. “That’ll give you bags more room and should ensure you don’t clip anything with the inside rear wheel.”

He’s right; by going wide on the entry and making a more open ‘U’ shape, our second attempt is clean, and every other turn we make is completed without issue.

Next up, it’s time to stick it in reverse. This, as you’d expect, is where many caravan owners start to struggle. But Keith’s advice (and patience) means we quickly get the hang of things. “Go slow and make sure your inputs are gentle,” he tells us.

Our towing guru has placed an orange marker on each of the caravan’s wheelarches, and by keeping them both in view, we can be sure that we’re reversing in a straight line. Of course, when reversing a trailer, it isn’t a case of merely steering in the desired direction. Doing so sends the caravan the opposite way. If you want to nudge it left, turn the wheel to the right, and vice versa.

Once you’ve got your head around things, it’s a really logical process. As soon as one of the markers disappears, a gentle prod in the opposite direction swiftly swings things back into line. Before long, we’re reversing around a corner and up a tight gravel track. 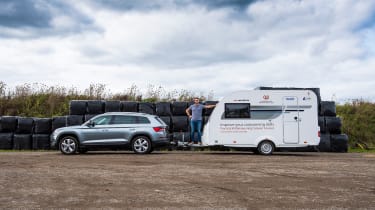 The final part of our day-long course is reverse-bay parking. It’s a thought that initially fills us with dread, but is a process many caravan owners have to carry out on a regular basis. Slotting into a numbered pitch on a British or European campsite will, more often than not, require a tight manoeuvre – in and among other vans, tents and playing children.

But with Keith’s help, the whole process is made straightforward. You initially turn the wheel in the opposite direction to meet your intended trajectory. As this sends the caravan towards the space, full opposite lock will ensure it straightens up and slots nicely into place. Pulling forward ever so slightly brings both of those wheelarch markers into view, before allowing us to reverse dead straight into our desired position.

In just a few hours we’ve got to grips with the basics, but feel adept enough to tackle almost all the procedures an average caravanner may face on a trip. It’s a wonder more people don’t take part in the Caravan and Motorhome Club’s basic training. For those regularly pulling a 750kg fibreglass caravan up and down the motorways, it’d be £175 well spent.

How you taken a towing course? Let us know in the comments below...