Those who have the temerity to pick up their loved ones from the airport are being ripped off, says Mike Rutherford 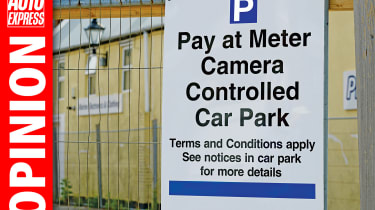 The overwhelming majority of Brits become motorists. Having ‘qualified driver’ status for decades is the norm. Being a motorist for half a century or more is not uncommon. Tommy Rutherford, my old man, has just retired from driving after more than 70 accident-free years behind the wheel of Italian, then German, cars.

We all know and fully accept we have to pay our fair share every step of the way. And we’re generally content to stump up hundreds of thousands of pounds during our long driving lives for licences, lessons, tests, vehicles, VED, insurance, fuel, oil, servicing, MoTs, parts, parking and other essentials.

• Too many companies are schemind to empty drivers’ pockets

True, excessive motoring taxes (particularly 20 per cent VAT on cars) hurt. Toll fees to use roads, bridges and tunnels we’ve already bought and paid for are despised. Exorbitant additional charges such as ‘congestion’ taxes or fines for entering ‘low-emission zones’ are hated by the understandably sceptical motoring masses. Yet still we obediently pay up – and then some – with little or no protest.

For those who prefer their cars small and modest but new or newish, during a driving life starting at 20 and ending around 70, their all-in spend could (in today’s money) easily total £5,000 annually/£250,000 over 50 years. Then think nearer £10k pa/half a million quid over 50 years for drivers who choose to buy and run large, luxury or sports cars. Put another way, we pay enough. More than enough.

But just when we thought motorists surely couldn’t be hit with any more legitimate or spurious car-related costs, fines, fees, taxes or other financial penalties, some of Britain’s airports are now charging those of us who have the temerity to drop off or pick up loved ones outside departure or arrival buildings. Whether you’re forced to spend £3 for five minutes at Manchester Airport, or you’re hit with a £1-per-minute charge at oh-so-glamorous Luton, you’re being comprehensively, cynically and cruelly fleeced.

Aren’t these naughty ‘drop-off’ and ‘pick-up’ fees/fines just a way to squeeze (even more) money out of car users? “No,” says an unapologetic Tricia Williams, Manchester Airport’s chief operating officer. How much money is she making out of such recently introduced charges? “Well, this isn’t a revenue-generating scheme,” she absurdly and unconvincingly insists.

Like most folk behind modern motoring rip-offs, the lady’s kidding herself. More importantly, she and some of her fellow airport bosses are legally ‘stealing’ cold, hard cash from the good motorists of Britain and further afield. Shame on them and their greedy establishments.