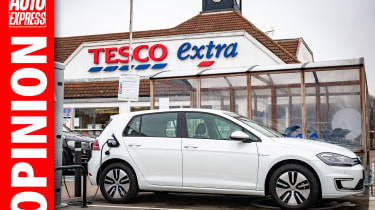 The push towards electric vehicles was always going to have ‘pinch points’ to hold it back. In the early days it was technology; we’re still emerging from the era when range was the issue. In some cases, it’s production and availability; witness the lengthy waiting lists for the likes of the Jaguar I-Pace and Hyundai Kona Electric.

Through it all, though, has been the nagging belief that if the above factors were to be solved overnight, the infrastructure – the charging network – would be woefully incapable of keeping up with demand. Who, it was frequently asked, would invest the cash to make EVs viable? Could private companies provide enough of the network, or would Government need to get involved?

This week, we see a good example of the progress that could and should make this argument irrelevant for the foreseeable future. It’s the announcement by Volkswagen, Tesco and Pod Point of plans to install 2,400 charging points in 600 supermarket car parks around the UK.

Just as we’ve been used to getting our cars washed as we shop, now it seems we’ll also be able to top up their batteries. And in one fell swoop, this will expand the UK’s public charge point network by around 14 per cent.

What’s in it for VW? Well, it believes on-screen publicity on the charging points themselves justifies the investment. That and the fact it breaks down another barrier for those who’d like to switch to electric motoring but aren’t yet sold on the ability to charge up. And just in time for VW’s I.D. range of all-electric vehicles.

Of course, extra charging points at supermarkets won’t solve all of the potential problems – but the announcement shows how one major initiative from a couple of big-hitters could make the difference for thousands of potential EV customers. And if VW and Tesco believe it’s worth doing, you can bet the other major supermarket chains and car makers will be considering something similar.

Looking for an electric car? Here's a list of our favourites...