Number of cars being cloned quadruples in six years 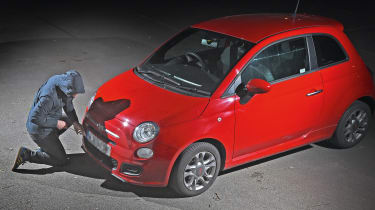 The number of cars being cloned in the UK has quadrupled over the past six years, with industry sources blaming the easy availability of so-called ‘show plates’ and the rising number of stolen cars.

Official figures from the Driver and Vehicle Licensing Agency (DVLA) reveal just 1,255 vehicles were reported as cloned in financial year 2012/13, but that figure rose to 4,802 in the nine months between April and December 2018. What’s more, police believe the true number is far higher, with the crime being under-reported.

Car-cloning “will only be done with criminal motives in mind”, say the police, and it occurs when number plates from one vehicle are affixed to an identical car crooks wish to disguise the identity of. That will typically be because the car has been stolen, and sometimes to facilitate other criminal activities such as drug-dealing.

While official number plates can only be purchased at DVLA-approved suppliers, who should ask to see proof-of-ownership documents, the unregulated availability of so-called ‘show plates’ online means fake plates can be easily and cheaply obtained.

Industry sources add that number plates contain no information to identify where they were made, and that tamper-proof plates are not mandatory. So tracing the supply chains for fake plates is impossible, while stealing plates from cars is simple.

The cloned-car data, obtained from the DVLA via a Freedom of Information request, echoes national trends, which have seen reported incidents of vehicle theft increase by almost 50 per cent in recent years.

When asked to explain the rise in car-cloning, Chief Constable Charlie Hall of the National Police Chiefs’ Council attributed it to “the growth in detection technology and cameras, with more victims being alerted through the issue of fixed penalty notices”.

However, Hall admitted that police “think cloning is under-reported because victims will usually be unaware their plate has been cloned”, and stressed that they are working with the DVLA to tackle the issue.

RAC insurance spokesman Simon Williams called cloning “the enemy of the modern motorist” and said that these figures are “a real cause for concern”.

He added: “After the initial horror of receiving a speeding fine, or worse, a court summons, a driver then faces the stress of having to prove their innocence and demonstrate they’re not responsible for the illegal actions in question.”

Williams hopes the recent formation of a new police car-crime task force will stem the rising tide of cloned cars. Meanwhile, the DVLA highlighted that its figures “do not show the outcome of the case, how many instances of fraud/cloning actually took place… [and] will not show how many cases were as a result of human error”.

What you can do to prevent car-cloning

• When buying a second-hand car, use established dealers or make sure you visit a private seller’s own home. Never do the deal in laybys or car parks.• If a car is being sold at well below its true market value, be very suspicious.• Make sure you compare the Vehicle Identification Number (VIN) found at the base of a car’s windscreen or in a door jamb with the V5C logbook and other supporting documentation.• Never share any pictures of your V5C logbook online, and don’t give out the 11 or 12-digit Document Reference Number contained on the V5C. • If you receive a parking or speeding ticket – or any other penalty notice – and you believe that your car has been cloned, contact the issuing authority, the police and the DVLA at once, and document everything you tell them in writing.

Have you ever had your number plate cloned? Let us know in the comments below...