The DVSA has cracked down on MoT testers who issue dodgy certificates, with 178 struck off in 2017/18 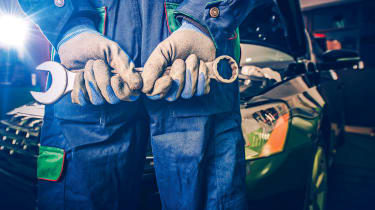 The number of MoT testers who have been struck off in the UK has rocketed over the past few years, with 82 per cent more testers banned in the 2017/18 financial year compared with 2015/16.

Some 178 nominated MoT testers previously authorised by the Driver and Vehicle Standards Agency (DVSA) were struck off in 2017/18, up from 98 in 2015/16. And 41 per cent more authorised examiners, who oversee testing stations, had their status withdrawn over the same period. Testers can be warned or banned for issuing fraudulent certificates, as well as improper or careless testing.

There are more than 23,000 MoT test stations in the UK, which makes those numbers look slim, but one corrupt tester was recently prosecuted for issuing 310 fake MoTs over 18 months, so discredited testers could have been responsible for tens of thousands of illegitimate MoTs – putting the safety of countless road users at risk.

AA president Edmund King said: “While most MoT inspectors do a great job, the rise in inspectors being struck off is worrying.”

King highlighted the essential role the MoT test plays in vehicle safety, and said that cars should never pass an MoT because they have been “fraudulently ticked through as a favour for a friend”.

He added: “The wider concern is that written-off vehicles could have entered into the second-hand car market, when all they were really good for was scrap.”

Jim Punter, editor of MoT Testing magazine, believes the number of improper testers caught by the DVSA is related to how much the agency spends on enforcement. He said: “The DVSA’s own analysis shows the average quality of MoT inspections isn’t as good as it could be. But the number of testers and testing stations taken out of the MoT scheme each year isn’t a reliable measure of the quality of MoT testing. It’s more to do with the amount of money DVSA spends rooting out bad testing, and encouraging honest testers and testing stations to do better.”

Neil Barlow, the DVSA’s head of vehicle engineering, said: “Using intelligence and enforcement, we are taking action against testers who put people’s lives at risk.”

David Matthew Barrington from Ottery St Mary, Devon, received a 16-month prison sentence, suspended for two years, last month for issuing 310 MoT pass certificates to vehicles he had never even inspected. Barrington, who acted behind the backs of his bosses, was also given a six-month electronic curfew order. Barrington pleaded guilty to issuing 50 fake MoT certificates, with a further 260 taken into consideration by the court.

The DVSA said it would contact the owners of the vehicles in question, and would also open a proceeds-of-crime investigation to determine if any money earned by Barrington from the dodgy MoT tests could be recouped.

Get a free MOT with a full service from Motoreasy with the code: AUTOEXPRESSMOT

Do you agree with the crackdown on MoT testers giving dodgy certificates? Let us know in the comments below...