The last Jaguar XJ will roll off the production line in July, making way for a new all-electric flagship model in 2020 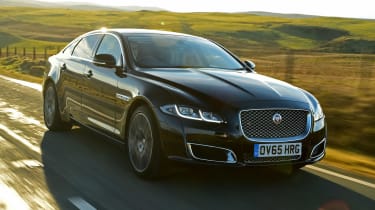 Production of the Jaguar XJ will come to an end in July this year in preparation for the expected arrival of a new all-electric flagship in 2020.

The last example of current XJ – known as the X351 – will roll off the production line on 5 July 2019, having first been launched a decade ago, with 122,330 examples having been built since then. A Jaguar spokesman said the company could “confirm that production of the current Jaguar XJ will come to an end, as planned, this summer - ten years after it launched.”

The XJ was facelifted in 2015, however the range was then cut back last year. The high-performance XJR – which was fitted with Jaguar’s supercharged 5.0-litre V8 – and all other petrol engines in the range were axed, leaving just the 296bhp 3.0-litre V6 turbo diesel. Jaguar also unveiled a special edition XJ 50 model in 2018 to celebrate 50 years since the original XJ first launched in 1968.

Jaguar has yet to officially give any specific details of a replacement for the X351, although it has confirmed that it intends to use the XJ nameplate again in future with the help of the brand’s “renowned engineering capability and technological innovation”. It’s predicted this will take the form of a new XJ with an all-electric powertrain, launching next year.

The X351 is the eighth-generation XJ and the first to feature Jaguar’s modern design language, with the previous seven generations having shared the same iconic look.

Are you sad to see production of the current Jaguar XJ come to an end? Let us know your thoughts below...