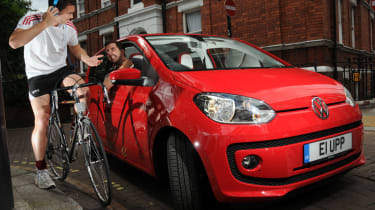 Uber passengers being dropped off near cycle routes will be given automatic safety alerts advising them to check for cyclists, following a surge in the number of ‘car dooring’ accidents.

The move follows hot on the heels of official statistics revealing an 18 per cent increase in accidents caused by vehicle doors being “opened or closed negligently” last year. Some 297 “car dooring” accidents were recorded in 2018, up from 251 in 2017.

Last year’s incidents resulted in two deaths and 214 injuries, of which 81 were classed as serious. The rise bucks a trend that has seen the number of car dooring incidents fall dramatically in previous years.

To help tackle the issue, Uber has rolled out nationwide Bike Lane Alerts, which will use push notifications to warn passengers they are being dropped off in an area where cyclists are likely to be, reminding them to check behind them when they open their door.

The news follows an announcement in October last year that rules recommending drivers should use the ‘Dutch Reach’ when opening their doors would be added to the Highway Code. The Dutch Reach method requires occupants to use the hand furthest away from the door when opening it, forcing them to look behind them for cyclists and other road users when exiting the vehicle.

Uber’s head of new mobility, Fred Jones, said: “By the end of October, more than five million alerts will have gone to Uber passengers across the UK, encouraging them to use the Dutch Reach technique.

“By cleverly combining data and education, we hope that more passengers will practise caution around cyclists, and ultimately improve the safety on our roads.”

Duncan Dollimore, head of campaigns at Cycling UK, said: “It’s vitally important to educate anyone who uses a car to check before opening their door as every year around 60 cyclists are killed or seriously injured by car dooring incidents. It’s also one of the reasons people tell us puts them off from cycling.“

Do you think motorists should be more careful when opening their cars doors? Let us know in the comments...