Traction Control – what is it, and how does it work?

All new cars are equipped with a traction control system but do you know how it works and when to switch it off?

Since 2011, every new cars has had traction control as standard. From that year, European Type approval would only be granted to a new car if it was fitted. The vast majority of manufacturers had made it a standard fitment long before this though – safety sells and there’s no doubt that a car fitted with traction control is safer than one without it.

Traction control is one of those safety systems that we tend to take for granted and for the vast majority of time behind the wheel we won’t even be aware it’s there, but it can be a vital safety mechanism in some situations.

• How to use ABS brakes correctly

Put simply, traction control is an electronic system within the car that has the ability to reduce or prevent wheelspin. A spinning wheel means that the tyre is no longer gripping the road surface effectively and could possibly lead to oversteer (where the back of the car steps out of line potentially causing a spin) in a rear-wheel drive car, or understeer (where the car doesn’t respond enough to your steering inputs) in a front-wheel drive car.

When was traction control introduced?

Traction control systems have been used in passenger cars as far back as the 1970s but these first systems weren’t desperately reliable or widespread and it wasn’t until the late 1980s and early 1990s that traction control started to become more commonplace. Like much of the standard equipment we’re accustomed to in cars these days, the gradual standardisation of traction control is a result of the increasing use of complex electronic systems within our cars. 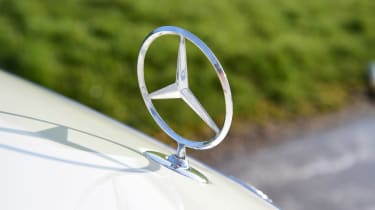 To start with companies such as Mercedes-Benz and BMW made traction control available on their high-end S-Class and 7 Series models and it has gradually filtered down to lower priced models and out to other manufacturers.

How does traction control work?

In its most basic form traction control is designed to detect when a tyre loses grip and starts spinning and then stop, or slow down the rate of spin. To do this the traction control system utilises the ABS sensors that detect when a wheel has locked during braking, but in reverse, looking for when one of the car’s driven wheels is spinning significantly faster than the other driven wheels indicating a loss of traction. Traction control can be fitted to a front-, rear- or all-wheel drive vehicle and the principle is the same no matter which wheels are driven.

Once a spinning wheel has been identified by the electronic sensors, the car’s on-board computer will momentarily cut the engine’s output to allow the wheel to slow and, hopefully, regain traction. In some cars this can almost feel as if there is a slight hesitation in the power delivery, or even feel like the engine has developed a misfire, but generally speaking modern traction control systems are so sophisticated that their intervention is often not detected from behind the wheel.

In addition to traction control most new cars also have an Electronic Stability Control system (often called ESP or ESC) which takes traction control one stage further by momentarily applying the brake to the wheel that is rotating faster than the others. Some systems can also shuffle the engine’s power to the wheels that have the most traction.

How do I know it’s working?

As with many safety systems, traction control has a ‘tell-tale’ warning light that will briefly illuminate when the car is started and then go out to indicate that the system is operational. If the light stays on permanently after the car has been started it means there is a fault with the system and should be checked by your garage. A permanently illuminated traction control warning light will be an MoT failure, too.

If you see the traction control light illuminating briefly when driving this is to tell you the system is actively in operation and preventing wheelspin. It’s most likely to be seen when driving in inclement conditions – heavy rain, snow or ice – or it may indicate a diesel spill on the road or a loose surface under the car’s tyres. It’s also possible that if you start to see the tell-tale light illuminating more frequently that it’s indicating that your car’s tyres are worn excessively.

Should I ever switch traction control off?

We wouldn’t recommend turning traction control off during normal road driving – it doesn’t matter how good a driver you are, the traction control system can act to prevent a loss of control far faster than you are able to react behind the wheel.

However, there are some circumstances where it’s advisable to disable the system. If you’re driving on snow or ice or in very muddy conditions then the amount of grip available to the tyres will be severely restricted and in these circumstances it’s preferable to have some wheelspin to try and gain some traction. If the traction system keeps detecting a spinning wheel in these conditions it will keep reducing the power which won’t help in giving the car any momentum.

So if you find yourself driving on mud, snow or ice consider switching the system off if you feel the car is getting stuck. It’s generally a switch that will be marked with something like ASR, TSC, ESC or ESP depending on the car’s manufacturer, while on some vehicles it’ll be in one of the menus on the car’s on-board infotainment system.

Has traction control ever saved you from a crash? Let us know in the comments below...