With new car sales on the decline in the UK, Mike Rutherford wonders if manufacturers could be doing more 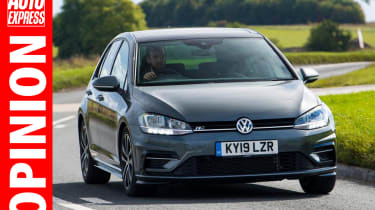 We’re into the last few moments of the 2019 new-car sales game. But the referee – the Society of Motor Manufacturers and Traders (SMMT) – hasn’t yet blown its final whistle before confirming the year-end score. Sadly and needlessly, it’s likely to be 2019 lost, 2018 won.

Put another way we’re looking at a drop in car registrations year on year. That’s bad for motor manufacturing/trade companies and employees; local air pollution (newer vehicles are generally cleaner); HM Treasury, whose VAT receipts will be down; and you, the motorist, who might have bought a new car this year – if only the industry tried harder to sell you one.

On Black Friday, countless high street retailers busted a gut to persuade consumers to buy, with discounts as high as 40 and 50 per cent. At the very least, why didn’t the sales and marketing folk at car makers and dealerships suffering depressed sales shout very loudly about the huge discounts they’ll have to offer if they’re to empty their compounds of unsold new vehicles?

Okay, half-price deals are impossible in this business. But two new cars for the price of one (high-end model plus mid-to-bottom of the range runabout) are doable – but rarely, if ever, offered to a bargain-seeking driver such as a parent, who really would appreciate another (free) car as a present for a partner, son or daughter.

So after they largely missed out on Black Friday, are manufacturers and franchises offering unmissable Christmas/New Year deals? Nope. Are dealership staffers emulating high street stores by clocking on and selling hard on Boxing Day and over the ‘Christmas shutdown’? Doubt it. Expecting big things from them during the January Sales? I’m not. It’s a shame, because 2018’s new car registration figure of almost 2.4 million motors could have been matched or exceeded if retailers tried harder this year.

There’s an exciting fleet of all-new, part or pure-electric vehicles that have lately hit showrooms. Then there are the cars manufacturers must legally have sold this year, not in 2020, in order to adhere to CO2 regulations imposed by uncompromising politicians.

I happen to know certain Mercedes with highish list prices are available with £11,000 discounts this month. Better still, some higher-priced new Audis are now being quietly sold with £27,000 cuts. Also, look out for heavily discounted examples of the current Volkswagen Golf, which is on the way out – but still perfectly usable over the next decade.

Showrooms are being revolutionised by a flood of pure and part-electric cars. Whether traditional sales execs and conventional dealerships sink or swim remains to be seen.

One thing we do know is that electrification adds huge costs to list prices. So maybe us consumers would be better off cluing ourselves up on new-car details and deals via Auto Express and elsewhere – before having our vehicles dispensed to us after we’ve inserted our credit cards into colossal, unmanned automotive vending machines. Believe me, they’re coming. And if they cut out the lethargic middle men, maybe that’s not such a bad thing.