Spacious new concept previews luxury cars of the future, and features a new user interface accessible from every seat in the cabin 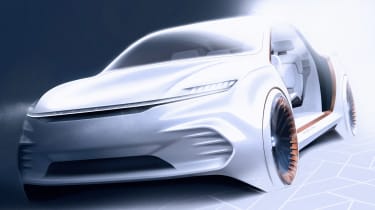 Fiat Chrysler Automobiles (FCA) have introduced the Airflow Vision concept at the 2020 Consumer Electronics Show in Las Vegas. Badged as a Chrysler - the ‘Airflow’ nameplate was used by the brand back in the 1930s - the concept previews how a luxury car of the future could look, both inside and out.

From the outside, the shape bears the hallmarks of a lower, sleeker SUV; the minimalist design has clearly been shaped with aerodynamic efficiency in mind. The bodywork seamlessly flows into each of the wheels and the raised roofline drops, coupe-like, towards the narrow LED tail lights. Chrysler says that the wheel-at-each-corner stance helps to create “a dramatic persona and aggressive, yet elegant silhouette.”

That stance comes courtesy of the platform used by Chrysler’s existing Pacifica PHEV minivan. But while that car seats up to eight, the Airflow Vision needs to only cater for four, giving each occupant a huge amount of space. The cabin is furnished with four individual seats trimmed in a mixture of leather and suede. 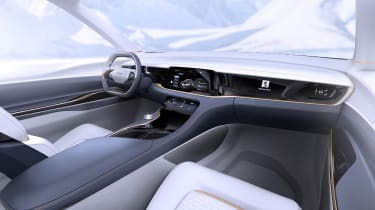 Given the concept is making its debut at the world's largest tech Expo, it’s not surprising to see that FCA is using the Airflow to preview a future generation of the group’s User Experience interface. All four on board have access to their own display, allowing anyone to help control the various navigation, heating and infotainment functions. This is made possible by one user swiping the functions across to another screen. A range of deeply customisable menus and widgets means that, according to Chrysler, the interface is designed to be as intuitive as possible.

While there’s no official word on the Airflow Vision’s powertrain yet, given that the platform is shared with a Pacifica PHEV, and the wheel design said to be influenced by the “mechanical elements of an electric motor”, it’s likely that electrification will play a significant part in the car’s propulsion.

Elsewhere on the FCA stand at CES, the Fiat Concept Centoventi made its debut in North America, ten months on from its Geneva Motor Show introduction. The all-electric supermini features a modular battery, meaning that buyers can spec their car to allow for anything between a 60- and 300-mile range on one charge.

What do you think of FCA's vision of the future? Let us know in the comments below...