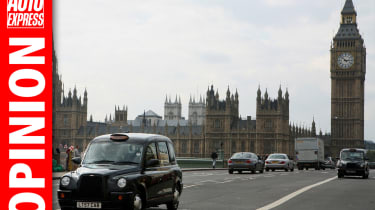 Our politicians often tell us – the humble, patronised subjects of Britain – that we’re damned lucky to enjoy the best, cleanest democratic system in the world.

At the same time, those squeaky-clean (yeah, right) political pros argue that certain Third World, developing or corrupt countries can’t and don’t do democracy. Apparently, in such politically iffy nations, huge sections of the population are ignored by even iffier rulers. It’s almost as if the masses don’t exist.

I know the feeling. Not because I’m from one of those foreign fiefdoms, but because I live in a Britain that’s fast shedding its ‘best democracy in the world’ status.

• General election 2015: who is on the side of the motorists?

Since 2010, we’ve had what nobody voted for – a Conservative/Lib Dem Coalition Government with David Cameron as Prime Minister and Nick Clegg as his deputy.

And now, on the eve of the General Election, these two plus Labour and a handful of tiny national parties are declaring what they’ll do for Brits from 2015-2020. They mention large groups such as homeowners and workers, plus smaller sections of the electorate - long-term hospital patients, pensioners and the like. Fair enough. So far, so good.

But cars, car drivers and passengers, car buyers and car industry employees are conspicuous by their absence from the manifestos of the parties. Seriously, I fear they’ve conspired to ignore us.

• Next Government urged to issue guidelines on in-car tech safety

Being almost 50 million strong, we motorists represent the overwhelming majority of the population. And by paying £60billion a year in road user and other car-related taxes, we prop up Britain.

Like large ethnic or religious groups in some troubled lands run by tyrannical regimes, it’s almost as if we – the blanked car people of Britain – are non-existent as far as our major political parties are concerned.

I’m an admirer of and grateful to those who bravely fought to win them and me the right to vote. But which national parties are car users supposed to vote for in 2015, when potential Prime Ministers Cameron or Ed Miliband, plus possible Deputy PMs Clegg or Nigel Farage, barely acknowledge our existence?

If what we’re witnessing at the minute is a traditional democratic system based on the needs and wishes of the many (car users), not the few (bus, train and bicycle users), I’m a banana.

Do you think the political parties are neglecting motorists and the automotive industry? Let us know in the comments below...