Inside the world's best driving simulator

A £2million, UK-developed driving simulator is breaking new ground for the motor industry. We get behind the wheel 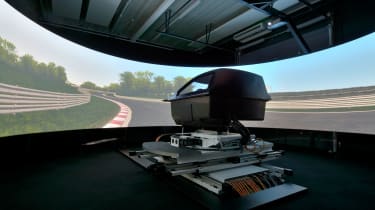 A driving simulator might conjure up images of the latest video game or a nausea-inducing ride at a fairground, but that’s child’s play compared to what’s happening in the automotive industry.

Immersing yourself in the graphical perfection of an Xbox game or being thrown around inside a simulator is great for entertainment purposes, but it won’t improve the cars we drive. The quest for car makers, therefore, is to create computer systems that give test drivers and engineers the most accurate representation of being behind the wheel, using just algorithms and equations. Millions of pounds are being pumped into this research and development field to reach the goal, but there’s a problem.

Simulators were once the realm of the aviation industry, and it’s only over the past 40 years that driving has muscled in on the territory. That’s meant manufacturers have often been left with the task of adapting an aircraft simulator to perform like a car, and generate the right movement to create the feeling of driving on a road, rather than flying through the sky. 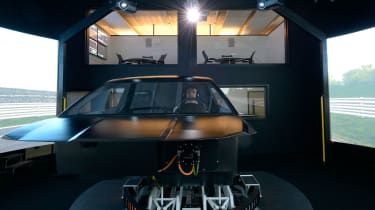 So what would a simulator look like if you designed it specifically for the car industry? It’s a question that struck Kia Cammaerts and Bob Stevens in 2009 and led to the creation of Ansible Motion. Six years on, and Auto Express has been given exclusive access to the end result: the full motion Delta Series simulator.

It’s been designed and developed solely at the Hethel Engineering Centre in Norwich, and various versions are now installed in car plants in Canada, Germany, the US and Japan.

So why are these simulators so important? Kia, a former employee at McLaren, Maserati and Team Lotus, explains: “Simulation absolutely dominates the design process, but driving simulators were very disappointing for vehicle dynamics and from the point of view of informing the development process about realistic human reaction to vehicle behaviour.”

Most simulators are based on the six-legged hexapod set-up – born out of the aviation world – and therefore operate off the ground. Clearly, this isn’t ideal for driving, but there’s a bigger issue. Once a hexapod moves to its full forward position, you can’t turn it, so movements are jerky and inaccurate.

“They don’t move quickly enough and induce nausea. If the motion you give makes drivers uncomfortable then the feedback is poor quality,” says Kia. “Hexapods are good for entertainment experiences as they make you feel like you’re in a car, but not in any particular car. The purpose of a car simulator is to know if you’re in a particular sports car or SUV. Otherwise it’s not very useful.”

Knowing what car you’re in is vital for the use of simulators in the areas of suspension, aerodynamics and performance. How does a car handle at speed, what’s the ride like over bumpy surfaces and what’s the torque steer like? Get these wrong and you have an unwieldy car drivers aren’t going to enjoy and that won’t sell. Sure, clever software programmers are able to create simulations that are run purely numerically, but what happens when you introduce the most complex and unpredictable computer on the planet: the human brain?

• The latest on driverless car technology

“The problem comes when human response to a vehicle matters,” says Kia. “How is the driver reacting to systems you are developing, like ABS and steering stability controls? The only way to find out is to put a driver in that car or a simulated model.” This simulation method, known as “driver in the loop”, is vital to car development, and while the tech is expensive, the alternatives are pricier.

Building prototype test cars is one option, but feedback can be inconsistent if build processes vary each time. The other solution is to create a computer programme – known as “software in the loop” – which acts as a human, but that’s not perfect. “It’s much more convenient to have a human driving a software model. It helps the design process and enables manufacturers to get the product to the market quicker and be more confident in the end result,” says Kia. 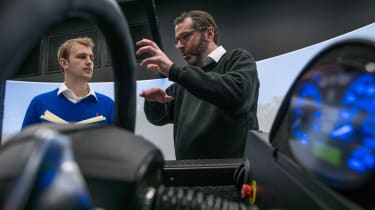 Such is the rate of change within the car industry, even the current simulator we’re seeing is already being further developed. “There’s still a way to go and we’re doing R&D into advancements now,” explains Kia. “I think the proof of the product is in the responses to the machines.”

While brands are benefiting from Ansible Motion tech, so, too, are drivers. It’s helping to produce better and safer cars. For example, A-pillar design can be tested to see how it affects a driver’s view out of the car, and simulated road layouts ensure there aren’t any blind spots at new junctions.

The future is bright for simulation, too. The wave of driverless tech coming to the market means software is embedded into our cars and will interact with humans more than ever before. That means getting it right is a top priority. Ansible Motion – and any future rivals – is a vital part of that.

The Ansible Motion simulator is unique, as it shuns the regular hexapod layout in favour of a stratiform – or layered – set-up that allows forward, side-to-side and rotational movement at any moment. It’s fully electronic and uses no hydraulics, with six main axes. Operators also have full control over the driving environment, including weather, tyre degradation, track layout and road surface. Each simulator is built to customer order, depending on demand, with the top-spec Delta Series costing up to £2million. 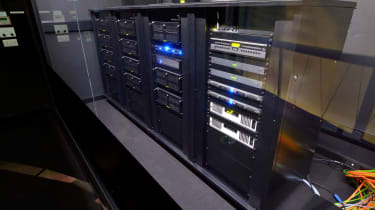 So how does it actually work? It’s complicated stuff and the design for the first prototype took six months before a further six months were spent building it. The motion platform taps into the human vestibular – the sensory system in the ear that contributes to our feeling of balance.

It creates ‘queues’ that the brain recognises as movement. So for a 100m braking zone, you don’t need a 100m long simulator, just the movement in the simulator to create the feeling that the brain can then interpret. Because movements are much more minor than in traditional simulators, it stops the feeling of nausea becoming an issue.

What's the Delta Series driving simulator like to 'drive'?

With all the technology powering the simulator, as we clamber into the cockpit we’re expecting great things. The cabin itself has been designed to resemble a mid-sized European saloon, but the carbon-fibre tub can be interchanged with whatever cockpit design is relevant.

We settled in and put the headphones and microphone on so the control room could contact us. Then the lights were dimmed and a track appeared on the wraparound screen. 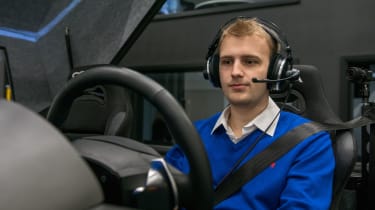 First up was a proving ground to give us the feel of steering and acceleration before we moved on to a practice course, weaving between cones to sense the back end sliding around. Finally, the screen changed to a test track where we could put the car through its paces.

Many of us have played video games with a steering wheel set-up, but not surprisingly, this was totally different. There was a real sense of the car tilting as we changed direction quickly.

What we found even better – bizarre even – is that we forgot we were sitting in a pod. There was a real sense we had wheels attached as we felt them slip and slide under braking and acceleration and as the car washed out with understeer. Like most simulators, it’s hard to create that sense of speed, so we had to check the speedo to make sure we didn’t hurtle towards a hairpin too fast.

Overall, it was engaging and accurate – and with so many options of what can be tested it’s little wonder manufacturers find the Delta Series so invaluable. Plus, it didn’t make me feel sick.

Check out our round-up of the best driving games on the market right now...