Britain - or some parts of it - needs a political party for motorists, says columnist Mike Rutherford 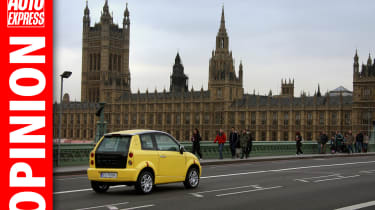 That's it for another five years then. The general election's been and gone. A contemptuous conspiracy of silence meant that the major and minor national political parties stuck to their unwritten rule of saying nothing about their plans for cars, drivers and car passengers between 2015 and the next general election in 2020. Seriously, I fear they effectively colluded to veto the 'too hot to handle' issue of cars, drivers/passengers, road tolling and related matters.

And - surprise, surprise - the party that now holds 100 per cent the power in the newly-formed UK Government was voted in earlier this month by only 11.3 million citizens. Or to put that another way, around 80 per cent of Britain's population did NOT vote for the (now ruling) Conservatives whose transport minister team has just been announced and comprises a former farmer, financier, train-obsessed coal miner and an IT salesman. Honest.

• If I was PM... Mike's motoring manifesto

The vast majority of the electorate are therefore disenfranchised and wholly unrepresented in the corridors of real national power. All this leads me to conclude that our democratic system is as flawed as Clegg, as broken as Milliband, as wounded as Farage...and about as credible as Mugabe.

Not only do ALL the British political parties need a proportional say in how Britain is run, but Britain (or at least some parts of it) needs a party for motorists.

No, The Motorists's Party wouldn't require or expect to win seats - after all, even when armed with a generous campaign budget, UKIP only won one. But drivers and their passengers are 50 million [correct] strong in Blighty, so thousands, hundreds of thousands or perhaps even millions of car drivers/passengers might just vote for nationwide representatives (plural) of The Motorists' Party.

If there's space in Britain for the likes of the BNP (1,667 votes), Monster Raving Looneys (3,898) plus the Yorkshire First (6,811) and Cannabis is Safer than Alcohol (8,419) parties, I'd like to think that The Motorists' Party could and should occupy an even larger, and far more important space.

The next general election is four years and 50 weeks away, so there's ample time to discuss, plan, form and formally launch The Motorists' Party.

Would it be fun or serious? A success or a flop? Who knows? Perhaps you do. If you're a car driver or car passenger, drop me a line at mike_rutherford@dennis.co.uk and let me know what you think. If you don't fall into car driver/passenger territory, sorry - there's no place for you at The Motorists' Party.

Let us know what you think! How sould the Motorists' Party best represent you?