"If motorists are so reluctant to put up a fight, the politicians will continue beating us with a stick"

Driver lethargy is the reason why our roads are underfunded, says columnist Mike Rutherford 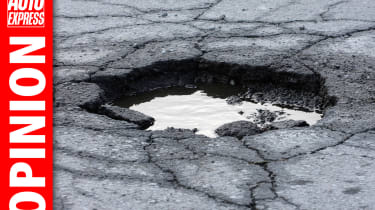 A wise and healthily cynical ex-politician recently told me why the authorities take so much from motorists (approximately £60billion annually), while giving so little back for our roads (£16bn).

Driver lethargy, he insists, is the issue. If motorists are so reluctant to put up a fight, the politicians will continue beating us with a stick. They see us as a strangely compliant bunch and treat us with the contempt they think we deserve, because we’re a soft touch.

He’s right. If motorists are to be heard, respected and feared by the establishment, we must be as productively combative as the ecomentalists, the cycling/bus/train industries and countless others who fight their corner.

Can anyone explain why our ‘representatives’ – the RAC and Automobile Association – aren’t hauling local or national governments through the courts to challenge scams such as the fatuous London Congestion tax, Britain’s pothole and parking scandals, or legalised theft from the pockets of drivers at the Dartford Crossing?

• “The 20-year warranty is available in the US, and it could be bound for the UK”

How can we possibly let the police confiscate then crush the cars of OAPs such as Jerome Lee, a gentleman from Surrey whose ‘crime’ was that he didn’t know he required a new licence at 70 because, er, nobody told him?

And why do we allow the lazy Department for Transport to shrug its shoulders and admit it has no clue how many vehicles use British roads? True, it knows there are 46.4m UK licence holders in Britain.

But that’s only part of the story, because countless others from overseas drive their cars or trucks (or hired vehicles) here on foreign licences or permits. We therefore have nearer 50m drivers.

And with our population predicted to grow from its current 64m-plus to 70m-plus, thereby making us the second most populous country in Europe, we need and are owed (because we’ve paid for them!) a road system and parking infrastructure capable of accommodating over 50m vehicles.

It’s the legal duty of local and national politicians to ensure there are sufficient numbers of hospital beds and school places in Blighty. And rightly so. But it’s equally right that they should be legally obliged to supply us with enough road space for 50m or more drivers. Currently, they’re doing no such thing. And their inaction will continue – unless and until we abandon the lethargy and start fighting our corner.