Disused railway lines are usually broad enough for a bike path, a no overtaking car lane and a hard shoulder 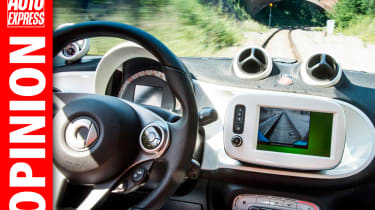 The thousands of miles of rail roads that Beeching and BR cruelly closed down and abandoned half a century ago need converting into pedestrian-free highways for cars, light vans and cycles.

Even the defunct single-track routes are – when weeds and dumped rubbish have been cleared – usually broad enough for a bike path, a no overtaking car/van lane, plus some sort of emergency hard shoulder.

• “We’d like to see cars designed by designers, not accountants”

Riders and drivers could then, under strict min/max speed limits, travel in one direction (towards town) from say, 2am-2pm, before pedalling or driving back from 2.01pm-1.59am.  Derelict two-track routes would be simpler as they’re wide enough to operate as normal roads, with two-way traffic.

Gangs of under-employed workers, tons of tarmac, gallons of white paint for road markings and a few entry/exit slip roads would – almost overnight – create a new, inexpensive and simple road network for Britain’s drivers and riders. It’s doable and affordable. So what’s not to like? 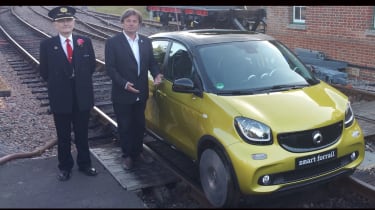 Alternatively (and, I confess, this is a slightly less serious proposal) let’s fit train wheels to cars and drive them down existing, but abandoned, rail tracks. Sounds ludicrously impossible. But it’s not. Under strict supervision and with the permission of the owner of a former BR track, I’ve just done exactly that – driven a car down several miles of rickety railway line.

Mercedes and its Smart car division are to blame for the madness. A 4am wake-up call, a 5am departure from my hotel at Mercedes-Benz World and a pre-6am arrival at a lovingly restored, movie set station in Sussex was, I thought, all part of the build-up for a ride aboard a steam train. Instead, a Smart ForFour was on the line, ready for me to commute into the Goodwood estate.

I drove the ‘ForRail’ in semi-conventional fashion, using the accelerator, brakes and gearshift, but only to a maximum of 20mph – or 6mph when nervously driving over the points. The steering wheel was redundant as the line of the track and the archaic but (just about) working points dictated the direction(ish) of travel.

Since the late seventies I’ve covered over a million miles behind the wheel of thousands of cars. But I can confirm that this was the most surreal drive of my life. By a long, long way.

Are you in favour of Mike's plan to turn Britain's disused railways into roads and cycle paths? Join the debate in the comments section below...