"Diesels seem to be appropriate for politicians - but not for us"

Politicians are bullying diesel owners- but they use diesels themselves, says columnist Mike Rutherford 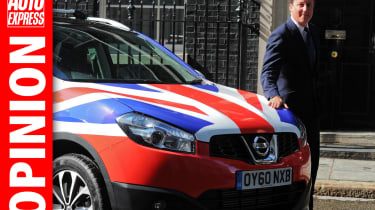 Motorists who’ve lately bought fuel-efficient diesels in good faith are now fearing their ‘leaders’ will punish or even ban them from using such cars.

These consumers have done their research and concluded – correctly – that medium-to- large family diesels are usually a better bet than petrol or electric vehicles. They’ve already invested their hard-earned cash in them, and planned to keep them for years before selling them for healthy prices second-hand.

• "The true effect of the VW scandal has yet to emerge"

Trouble is, the anti-diesel movement is as dangerously alive today as it was during the dark days of Conservative/Lib Dem coalition Government just gone. True, former Lib Dem leader, Nick Clegg, started the discriminatory process by insanely promising to ban all diesel cars. And although such irrationality helped lose him his job as Deputy PM, his £300,000 bomb-proof ministerial limo, and his now near extinct party, the war against diesel cars continues without him.

Aided and abetted by their mentalist mates, local and national politicians still bully and threaten the future of such vehicles and their drivers.

• 'Car manufacturers building our houses is a great idea'

Against this background, guess what the British Government’s Environment Agency has just gone and bought from a US manufacturing giant? Fifty-five 4x4s – powered by diesel engines. Put another way, diesels are right and proper and appropriate for them... but not us.

Continuing the hypocrisy theme is John Bercow, the House of Commons Speaker. He’s supposed to know the difference between right and wrong, good and bad, truth and lies. But does he? He’s recently been exposed for, among other things, ‘spending’ £172 on a car journey of less than one mile. Enough said.

• 'The car industry mustn't get bogged down in negativity'

And the last (for now) of the great Conservative hypocrites is Philip Davies MP, who after pledging to “speak up for carers” effectively blocked proposed laws that could have provided free hospital parking for them. But Conservatives don’t have a monopoly on hypocrisy. Oh no.

Newly elected Labour leader Jeremy Corbyn insists: “I cycle ALL the time.” His spin doctors add “he doesn’t like cars”. Fair enough. So why is he often photographed in them? And how come he has just accepted an offer to have his own taxpayer-funded chauffeur and official car? Let’s just hope that Labour’s new hypocrite-in-chief at least has the good sense to opt for a diesel.

Do you agree with Mike Rutherford? Have your say in the comments below, on Twitter or on our Facebook page.