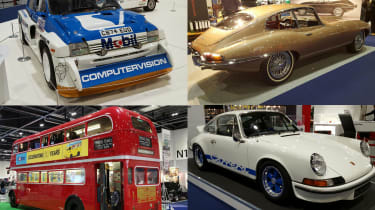 The 2016 London Classic Car Show is upon us, which gives us the best opportunity to drool over and dream of owning some of the coolest cars in history.

The event, held at the ExCel centre in London’s docklands, is a must-see for the discerning car enthusiast. This year, 2009 Formula One World Champion Jenson Button attended the preview event, along with fellow F1 driver Bruno Senna, Alain de Cadenet and Jodie Kidd but now the real business can begin as the London Classic Car Show is open to the public!

The event is organised in a similar way to most motor shows on the calendar. A range of car brands, motoring clubs and heritage organisations have fixed stands for visitors to browse around. To add to the spectacle, a central highway runs through the show and acts as an indoor, moving motor show. The show’s website promises that this ‘Grand Avenue’ “will be significantly longer” this year, so more classic cars can parade from end to end at any one time.

Throughout the 2016 London Classic Car Show, which runs to Sunday 21st February, the event is aiming to find out which country makes the best cars in a Classic Six Nations Cup. Classic cars from the UK, France, Germany, Italy, the USA and Japan will go head-to-head, and visitors will be able to vote by text for their favourites. The grand final will be held on the final afternoon of the show. Other highlight events at the show include a look into the McLaren F1 with designer Gordon Murray and the history of rallying.

It promises to be a great event but in case you can't make it, here are some of the best looking cars we’ve seen so far for you to drool over...