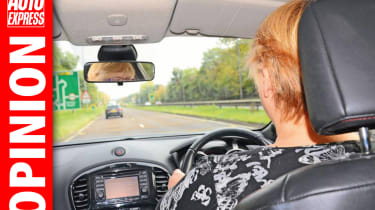 The Institute of Advanced Motorists had a problem – its name suggested the organisation catered solely for drivers of advancing years and experience. This was the sort of club your dad or grandpa would join. Those in their teens, twenties and thirties wouldn’t. Basically, members were blokes who wore grey suede Hush Puppies, not youngsters in bright trainers.

Matters didn’t improve hugely when the organisation was rebranded as the IAM. Google says that also stands for the Institute of Asset Management. Then there’s I AM (the documentary film) plus will.i.am (singer and TV star). Confused? You won’t be by next week when the IAM is rechristened.

Even with the imminent arrival of driverless vehicles, the charity slash commercial organisation insists our role as a human driver is “even more important” and that we shouldn’t rest on the laurels of technology.

It reassures us that there’ll be a focus on “fun”, too – not least becase its research says life behind the wheel is more enjoyable for those who adopt a greater interest in driver education and techniques.

When reborn, IAM will be “championing” the motoring cause like never before, it reckons. This doesn’t mean more criticism and demands for the usual suspects – the Department for Transport and the like. Instead, the plan is to provide more practical and achievable solutions to long-established problems. This means that, for example, my plans for ordering the clueless DfT to step aside and hand control of the roads to interested, clued-up motorists who’ve already paid for the network several times over would not be adopted.

The only ideas to be suggested are those that have a realistic chance of implementation. So, another one of mine – every qualified driver should undergo an annual driving appraisal (not a pass or fail ‘test’) – might just get the nod. Get that mirror-signal-manoeuvre sorted now.

• Would you pass your driving test now?

As for the ongoing struggle to attract enough young drivers, why not offer written and practical tests that result in rewards, such as cheaper car rental, fuel and insurance? Also, I reckon the organisation desperately needs to establish a Young Adult division. Space for a keen, erudite, 20-something driver must be found around the tired old boardroom table in Chiswick, if at least to argue the Hush Puppy as a much outdated driving shoe. Oh, and another thing – it’s time to ban the driving glove.

Do you think the IAM needs to broaden its appeal? Let us know in the comments below...