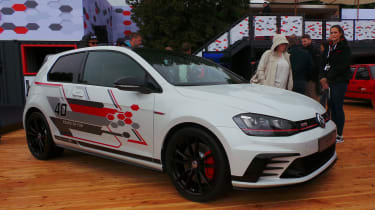 Once upon a time, the Worthersee festival was just a small gathering for fans of the Volkswagen Golf GTI. That was thirty years ago, though, and since then Worthersee has grown to become, quite simply, the biggest gathering of VW Group fans in the world.

Held in the Austrian Alps around the shores of Lake Worthersee, the event attracts over 100,000 people every year who come mainly to show off their cars. Modified or stock, GTI, Cupra or RS, new and old, if it's VAG it's at Worthsee - and probably on a gleaming set of 20" chrome rims.

Worthersee has grown to such a level that even the manufacturers have taken note. VW, Audi, SEAT and Skoda all operate official stands at Worthersee, and often create bespoke concepts especially for the event. Volkswagen revealed two new concept cars at the festival this year, alongside the record-breaking Golf GTI Clubsport S, the two Golfs were designed and built by a team of 12 Volkswagen trainees. 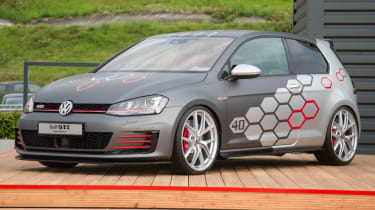 The Golf GTI Heartbeat has a 395bhp 2.0-litre turbo engine and front-wheel drive. The one-off, three-door model sits on 20-inch BBS wheels and gets an aggressive bodykit and unique colour scheme. Its silver paintjob is covered at the front in contrasting grey foil. Honeycomb graphics cover the side, bonnet and roof, with ‘40’ emblems in a nod to the hot hatchback’s anniversary this year. Inside, there’s a pair of folding bucket seats lifted from the Clubsport S, while ‘heartbeat’ symbols decorate the doors and trim. The rear seats, meanwhile, have made way for a 1,360-watt sound system, with seven speakers and LED lights.

The Golf R Variant Performance 35 gets a 345bhp version of the same engine, this time paired with a four-wheel-drive system. The 35 refers to the boosted (350PS, or 345bhp) power output, and the fact that this year’s festival is the 35th meeting. 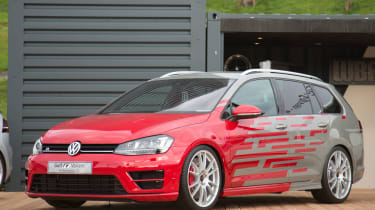 Highlights for the Performance 35 include multi-layer grey and red paintwork, apparently applied by hand. The interior is adapted to match the exterior, using airbrush techniques and special LED ‘stars’. Like the GTI Heartbeat, the Performance 35 estate gets a high-end stereo, this time with 12 speakers and a 2,500W output. But VW claims the boot remains untouched, with the addition of an electrically retractable cargo floor. Neither car is likely to make production.

Unlike more conventional motor shows and gatherings, Worthersee doesn’t have a lot of structure to it. Instead of dedicated stands, VW Group fans simply descend en masse onto the town of Reifnitz and set up shop on any peice of spare tarmac they can find - with some residents even hiring out their driveways.

All kinds of VAG products are welcome at Worthersee, and pricier doesn’t necessarily mean better. It’s not uncommon to see Audi R8’s and Porsche 911’s completely ignored in favour of Mk1 Golf GTIs or classic modified Beetles. No alteration or addition is too great or gaudy. Engine swaps are rife, cars are lowered to mere millimetres off the road, and often you’ll have to look twice to try and spot the original model underneath the heavy modifications an owner has added on. 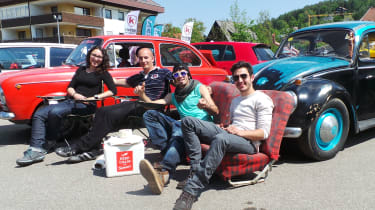 Of course, like any other car meet, the temptation to show off mechanical superiority is there, though the local Polizei keep a watchful eye on proceedings to ensure the local roads stay free of racing. Even without this, though, it's impossible not to be impressed by the sheer variety of cars on show at Worthersee, and the dedication put into them.

Click through the gallery for our pictures from Worthersee 2016 - the Mecca of VW group fans.