Whether Britain's exiting the EU goes smoothly or not, Steve Fowler is sure that the UK motor industry will power through 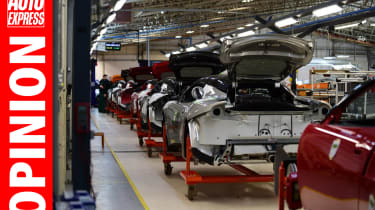 It may not have been the outcome the car industry or 48.1 per cent of voters wanted, but over the next couple of years the UK will be extricating itself from the European Union.

Once the initial hysteria over the result of the referendum dies down and the markets settle, it’s clear that much work lies ahead to protect what is a thriving UK car market and UK car industry.

As Mike Hawes, boss of the Society of Motor Manufacturers and Traders (SMMT) says: ‘Government must now maintain economic stability and secure a deal with the EU which safeguards UK automotive interests. This includes securing tariff-free access to European and other global markets, ensuring we can recruit talent from the EU and the rest of the world.’

‘The cost of borrowing remains steady and that’s a key driver in the car market today,’ says Hawes.

In the longer term, the UK will remain the second biggest car market in Europe and one of the biggest in the world. Foreign car makers can’t and won’t turn their backs on such a lucrative market and will also be pushing for free trade deals to ensure tariffs don’t make their products more expensive and less competitive in the (still growing) UK market.

• "In or out of the EU, it'll make no difference to motorists"

As for those car makers who’ve invested heavily in UK manufacturing, free trade deals across Europe are essential to them too. Whether we’ll see any new plants pop up depends on those trade deals and, as usual, government incentives.

What we can say for sure is the people working in the UK car business are among the world’s best, building and creating some of the greatest cars. And that won’t change.

What do you think will become of the UK motor industry after the Brexit vote? Let us know in the comments below...