Euro NCAP turns 20 years old this year, so we look back at how car safety has evolved over time 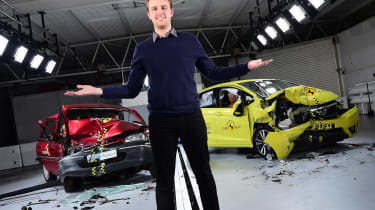 Euro NCAP marked its 20th anniversary by highlighting the huge improvement in car safety over that time. To do so, the organisation did what it does best, crashing a 20-year-old Rover 100 and a new Honda Jazz.

The outcomes are startling, with the Jazz maintaining its shape while the 100 crumples into itself. Ultimately, it’s the difference between life and death for driver and any passengers.

Car safety has got a whole lot better since 1997. Just watch this... http://www.autoexpress.co.uk/car-news/98483/how-far-has-car-safety-come-old-car-vs-new-car-crash-test

This evolution of car crash safety means that since February 4 1997, when Euro NCAP carried out its first test, the number of people killed and seriously injured on UK roads has fallen from 23,000 to 8,500 per year. That’s a 63 per cent fall driven by fewer adult occupants dying in accidents.

It was a test of the Rover 100 that brought the issue into sharp focus when it was crash tested in 1997, as part of the first ever testing programme of Euro NCAP. The one-star rating it received shocked the industry and motorists alike and ultimately led to the Rover 100, based on an eighties Metro design, being pulled from production. And so started the push to try and reduce the number of car occupants dying during crashes. 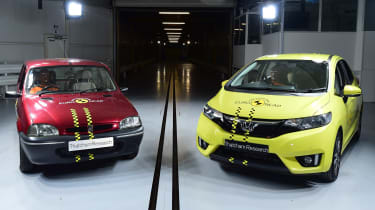 The first ever test was actually conducted with a Ford Fiesta on that day in February 1997, followed by a batch of a number of vehicles. What these highlighted were glaring safety flaws in some of the best selling family models on the market.

The crash we saw here at the testing lab at Thatcham Research to mark the 20 years was a re-enactment of that Rover 100 crash alongside a test of a 2017 Honda Jazz - the safest supermini currently on sale.

The display was of the 40 per cent frontal offset test, just one of four done by Euro NCAP on every new model. There’s a full frontal test, a mobile side impact and a side impact into a pole (to mirror hitting a tree). Plus the seats are stripped out and tested separately for whiplash and an AEB test is also run at a test track.

• What is EuroNCAP? Everything you need to know

The frontal offset into the deformable barrier is regarded as most representative of a typical crash in the real world, essentially a car drifting across the centre white line and hitting an oncoming vehicle. 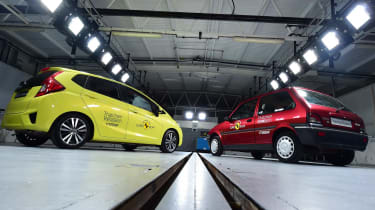 The Jazz and Rover 100 weigh roughly the same and it takes them the same 10 seconds to cover the distance after the warning klaxon has been sounded, before the winch releases them two metres out from the crash block. What follows is a shuddering impact but the differences between the two cars after the 40mph crash is night and day.