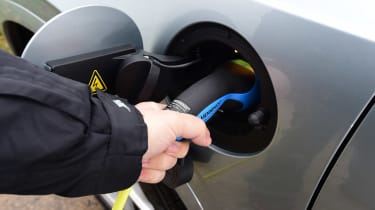 BP will install electric vehicle charging points at some of its UK forecourts later this year as part of a new trial to see how conventional fuel forecourts can be integrated with EV charging requirements.

The oil giant, with over 1,300 forecourt sites in the UK, has invested $5 million (approx. £3.5m) in FreeWire, a US company specializing in rapid charging systems for electric vehicles. BP will trial FreeWire’s Mobi Charger at selected sites in the UK. The Mobi Charger doesn't need hardwiring in like a conventional charging booth, and can be moved from one vehicle to another - supporting up to 10 vehicles in a day at both normal and rapid charging rates. The company has yet to disclose how many UK forecourts will be part of the trial.

A BP spokeswoman told Auto Express the Mobi Charger rapid charger will be able to recharge a Nissan Leaf from flat to full in 30 minutes. Though there is no set period in place for the trial, BP said it would also consider a "suite of other charging options, including fixed chargers in the future."

The news follows a previous announcement by the company’s chief executive Bob Dudley who said BP was in talks with a number of vehicle manufacturers over a “tie-up with our retail network for charging.”

BP also announced that drivers of petrol and diesel cars will be able to offset their carbon dioxide emissions whenever they refuel at a BP site. With the new BPme app, BP will record the amount of fuel they use between top ups, and calculate each driver's average tailpipe CO2 emissions from their vehicle. Drivers can then agree to offset their CO2 emissions by paying a small fee to invest in one of BP's accredited sustainable development projects around the world - from investing into biodigesters in rural China to replacing old cookstoves in Peru with sustainable ones.

The fees will be sent quarterly and BP says drivers will typically pay around £13 to offset their carbon emissions, though this will depend entirely on fuel consumption and mileage.

According to Tufan Erginbilgic, chief executive of BP Downstream: “EV charging will undoubtedly become an important part of our business, but customer demand and the technologies available are still evolving.

“Using FreeWire’s mobile system we can respond very quickly and provide charging facilities at forecourts where we see the greatest demand without needing to make significant investments in today’s fixed technologies and infrastructure. The opportunity also to explore options for providing charging services away from our existing retail sites makes FreeWire an ideal partner for BP.”