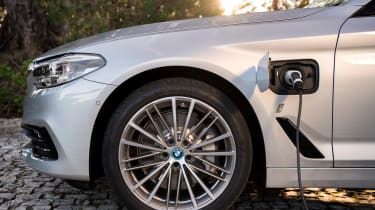 Electric cars will need to be capable of ‘smart’ recharging if the UK wants to avoid costly upgrades to the power network in the next two decades, new research has found.

According to analysis by Aurora Energy Research, the next two years could see electric cars reach cost parity with conventional diesel and petrol cars. By 2035, Aurora estimates there could be 10 million electric cars on Britain’s roads, representing 30 per cent of the overall vehicle fleet.

This rise in EVs would increase power demand by 19TWh per year, a six per cent increase from the current power usage. However, the study warns that peak demand in the evenings, when owners typically recharge their cars, could go up significantly as a result. Charging all 10 million cars during peak hours “would require an additional 3GWs of additional generation capacity at peak times, as well as requiring potentially costly reinforcements," according to the study.

Future EVs capable of ‘smart’ recharging, where they recharge their batteries during off-peak hours or where energy companies take over the charging times for EVs, could reduce the impact EVs have on the grid.

Richard Howard, head of research at Aurora Energy Research said: "There are many scare stories out there suggesting our power system cannot cope with the growth in electric vehicles. On the contrary, our research suggests that provided EV charging is smart, the GB power system can easily accommodate 15 million+ electric cars. In fact, the flexibility of EV charging could be beneficial for overall grid operation, and improve the economics of renewable power.”

The research comes after the National Grid previously warned EV owners that they may not be able to charge their car via a rapid charger at home when using other utilities, such as boiling the kettle.

The grid operator said that using a fast charger, which can be installed at home to reduce charging times, is likely to trip a house’s main fuse if used simultaneously with other ‘high demand’ items such as kettles, ovens and immersion heaters.

The average household has a main fuse of 60 to 80 amps and an above-average sized 11kW EV charger requires 48 amps, so adding a small number of 13A appliances risks exceeding the limit, according to the company.

But Erik Fairbairn, founder of charging company Pod Point, told the Financial Times that a 32A 7kW charger would be powerful enough for most home charging needs because EV drivers rarely drain their battery fully during daily use. He added that only five per cent of UK homes would be able to accommodate a charger more powerful than 7kW.

National Grid estimates that a 7kW unit would charge a long-range EV such as the Jaguar i-Pace from 25 to 100 per cent in 10 hours, and a smaller 3.5kW unit would take 19 hours. Government grants of up to £500 are available for motorists to install fast electric car charging units at home.

Could you live with an electric car? Here are the pros and cons of life with an EV...