Improved tech added as part of the Jaguar I-Pace’s mild facelift, with the range now starting from £65,195 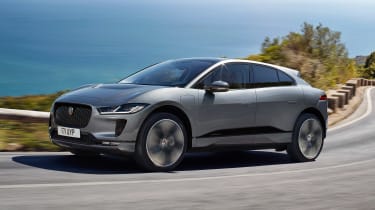 This is the updated Jaguar I-Pace, refreshed for the 2021 model year and designed to help the award-winning electric crossover keep up with the rapid progress in the premium EV market.

The Austrian-built model – which was Auto Express’s Car of the Year in 2018 – gets no major changes to its core hardware, including its battery pack and electric motors – but Jaguar’s engineers have reworked some of its charging technology and introduced new styling features, as well as an overhauled infotainment system.

As such, the I-Pace’s power and performance figures remain unchanged. It has a twin-motor configuration producing 396bhp and 696Nm of torque – enough to deliver a 0-62mph time of less than five seconds. The 90kWh battery produces a predicted range, on the tougher WLTP test, of 292 miles – although following that evaluation, the company released an update late last year which promised to stretch the figure by up to 12 miles.

However, the I-Pace does now get three-phase AC charging, which allows an 11kW home charger to add 33 miles of range every hour – a gain of a third over the maximum rate that was achievable using the old two-phase AC system.

The big changes in the 2021-model-year edition of the car come in the cabin, where the I-Pace is now fitted with much of the infotainment and connectivity technology introduced on the recently launched Land Rover Defender. The latest Pivi Pro system includes a 12.3-inch HD instrument display and uses the I-Pace’s existing pair of 10-inch and five-inch touchscreens, incorporating haptic technology. 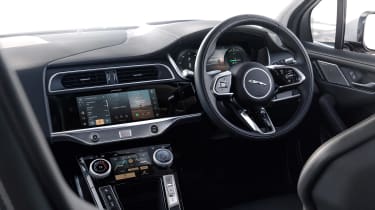 The interface has a ‘flat menu structure’ that is designed to allow you to jump between regularly used functions more easily – and the software incorporates both Android Auto and Apple CarPlay as standard. Pivi Pro also gets over-the-air updates to keep maps and software upgraded to the latest versions without needing a trip to the dealership.

The I-Pace is now offered with a wireless charging pad as an option, and the car gets an embedded SIM and complementary 4G data plan as standard, allowing music streaming over Spotify and similar services without the need to use your smartphone.

Jaguar has kept the exterior changes relatively minor, but there’s a new chrome finish on the front grille (a standard feature, and one probably aimed at Chinese buyers), the option of 19-inch wheels for the first time on the model, and a Bright Pack that accentuates the exterior design with chrome and Atlas Grey detailing.

Elsewhere, the I-Pace is available with the same ClearSight digital rear-view mirror that made its debut on the current Range Rover Evoque. Its roof-mounted camera gives a clearer image than you’d get through the I-Pace’s narrow hatchback glass.

The 2021 I-Pace is available to order now. Prices start at £65,195, a small increase over the current car’s entry point.