Ministers warn incentives must offer “value for money for the taxpayer”, and “we think there’s a better way of doing it” 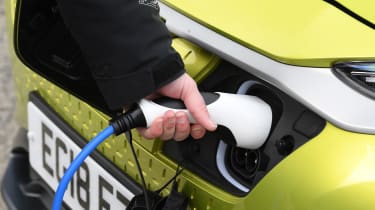 The future of the UK Plug in Car Grant (PiCG) - which sees Government subsidies knock £3,500 off the price of a new electric car - looks increasingly shaky, following statements from two Government ministers casting doubt on the scheme, which is due to end in March 2020 by default.

This is despite the ban on sales of new petrol and diesel vehicles being brought forward from 2040 to 2035, and the expansion of the ban to take in hybrids and plug-in hybrids (PHEVs).

• What is the plug-in car grant

The Department for Transport’s Future of Transport Minister, George Freeman, told Auto Express the grant was only ever intended "to kick-start the early market for electric vehicles, and funded over 200,000 electric vehicles including pure electrics and plug-in hybrids." Freeman highlighted figures from the Society of Motor Manufacturers and Traders (SMMT) that showed a 204 per cent increase in EV sales in January, compared to the same month last year.

Freeman added: “But as prices of these cars come down, it is right that the Government ensures value for money for the taxpayer while focusing our support on zero emission models.”

The increasing popularity of electric cars bringing about a reduction in pricing is, however, an uncertain future trend. Car makers struggle to turn a profit on electric cars, with Mike Hawes, chief executive of the SMMT, describing EVs as “generally loss leaders” for firms.

Further uncertainty over the future of the PiCG was sewn by secretary of state for justice, Robert Buckland, who told a Question Time audience that instead of the PiCG: “We think there’s a better way of doing it...By scaling up the infrastructure it means that more people will start to buy electric cars, and with that scale of demand then the price starts to come down. I think that’s the way we’re going to do this.” Buckland added that he couldn’t “judge what’s going to happen in the budget”, however.

The SMMT's Mike Hawes warned the Government must "bring the consumer on the journey with an equally ambitious package of incentives and infrastructure."

He added: "Prematurely removing upfront purchase grants can have a devastating impact on demand so we need a long-term commitment to the plug-in car grant as a matter of urgency. This must also apply to all zero-emission capable vehicles, including plug-in hybrids, which not only deliver essential air quality and environmental gains today, but are an important stepping stone to a tailpipe-free future.”

The Budget, which is to be delivered on March 11, is under the control of the Chancellor of the Exchequer and the Treasury, with a spokesperson for the latter telling The Telegraph that “We have always said we would phase out the subsidies gradually, but there are other ways we can help people to go electric.”

The paper’s Government source insisted that “consumer incentives will continue to play a role beyond 2020” and that “we are not going to end up in a cliff-edge situation where we suddenly stop subsidising electric cars”.

But with rumours continuing to circulate that the PiCG will end in March, and no firm denial from Government this this will be the case, it looks increasingly likely that the only incentives to remain will be a £500 discount on home EV chargers, exemption from VED road tax, and reduced taxation for company car drivers, who will escape all Benefit-in-Kind charges this financial year if they choose an electric car.

Sales of new plug-in hybrids to be banned: confirmation

When the Government announced its consultation into moving the 2040 ban forward to 2035, it said the ban would be “including hybrids for the first time” - though no mention was made of plug-in hybrids (PHEVs).

Future of Transport Minister George Freeman confirmed to Auto Express, however, that while PHEVs “can deliver significant emissions savings and will continue to be important in helping motorists make the switch to a cleaner and different way of powering their vehicles”, the Department for Transport considers that “they are not always driven in zero emission mode and would therefore not be permitted for sale after the phase out date.”

Freeman highlighted that charging infrastructure played a huge role in the Government’s £1.5billion Road to Zero strategy that aims to bring about zero emission road transport.

“We want to have the best charging infrastructure networks in the world for electric vehicles, and for chargepoints to be accessible, affordable and secure. We now have over 24,000 publicly accessible charge-points across the UK, and more than 2,500 are rapid devices, one of the largest networks in Europe.”

The Minister highlighted a £400million investment, half of which came from private business, and half from Government coffers, that “will see thousands more electric vehicle chargepoints installed across the UK.”

Asked if any restrictions related to the sale of second-hand petrol, diesel and hybrid cars were being considered, Freeman was firm: “To be clear, this consultation is about the phase out of new sales of petrol and diesel cars and vans. It does not include used vehicles.”

Should the plug-in car grant be axed? Have your say in the comments...