Pothole compensation claim made every 11 minutes in Britain

Councils pay out £3.2 million in pothole damage compensation but approve less than a quarter of all pothole claims 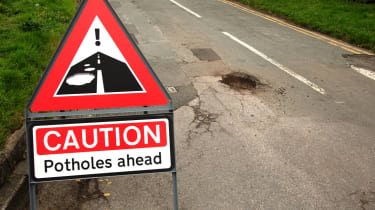 A compensation claim for pothole damage was made every 11 minutes by motorists in Great Britain last year, council figures reveal.

Almost 50,000 drivers lodged claims in 2013/14, with local councils in England, Scotland and Wales shelling out £3.2 million, according to a report by the RAC Foundation.

However, less than a quarter of the 48,664 pothole claims were approved across Great Britain, with this dropping to as low as 18 per cent in Wales.

The number of claims in 2013/14 was up on the previous year, but the average payout for a successful claim was down from £357 to £286. The average administration cost of each claim – successful or not – was £147.

The estimated pothole backlog on British roads stands at £12 billion, and the RAC Foundation, which researched the latest figures from Freedom of Information requests to all 207 councils, said the Government needed to prioritise transport spending with HS2 costing an estimated £50 billion.

Professor Stephen Glaister, director of the RAC Foundation, said: “These figures are likely to be the tip of the iceberg. Many drivers will be put off by the time involved in claiming against a council, and many councils do their best to deter claimants coming forward.

“But the fundamental problem lies not at the doors of our town halls but with central government. Despite occasional one-off grants related to periods of harsh weather, they are simply not giving councils enough money to keep their road networks up to scratch.

“Worn-out road surfaces do not simply cause damage to vehicles; they are also potentially lethal, particularly for two-wheeled road users."

Have you ever made a claim for pothole damage to your car? Tell us about it in the comments section below...