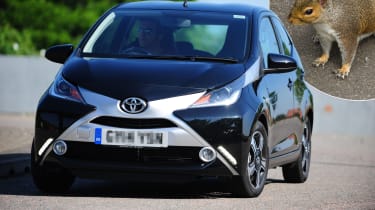 Rogue squirrels have been blamed for repeatedly gnawing their way through parts on a brand new Toyota Aygo.

Owner Tony Steeles, from Croydon, South London, went nuts after his Toyota Aygo was attacked by a band of hungry squirrels just days after delivery.

Tony’s aerial was chewed off twice, his oxygen sensor was damaged and other rubber trim was gnawed away by the hungry animals. 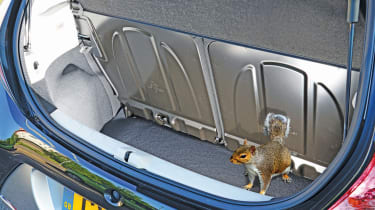 Oddly, no other vehicles in his road had been victims of the furry fiends, leading Tony to wonder if it was Toyota’s pioneering research into plant-based plastics that was making his car so appealing to the local squirrel set.

Door trims, seat cushions, spare tyre covers and boot liners are among the parts the Japanese manufacturer now makes with plastics derived from sources such as the castor oil plant following work by its research and development arm – Toyota Boshoku.

The list of ‘eco’ components on new cars is growing, too. Ford even announced last year that it was working with Heinz to research the use of tomato fibre in car plastics. Meanwhile, US oil maker SynLube claims food sources such as soy, peanut oil and even rice husks are used by some manufacturers. It also lists some cars in the States where rodent attacks have been frequently reported. 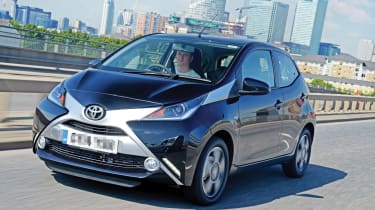 Tony’s dealer, Jemca Croydon, argued that there was no link between his car’s plastics and the squirrel attacks. However, it did pay for the repairs each time he returned the car, and eventually swapped Tony into a new Yaris.

Auto Express contacted Toyota directly to find out if this green-fingered fad could be making new cars irresistible to hungry wildlife.

A Toyota spokesman told Auto Express that Tony’s issue was “unusual”, adding: “We have very few complaints of this occurring in the UK. It is known that this issue can occur to plastic parts regardless of whether they are derived from plant material or not. Toyota continues to utilise 'bio-plastics' for a number of applications in its cars, due to the benefit it has in lowering the carbon impact of production.”

However, Toyota added its research and development teams would “investigate if any improvements can be made to the design of our products to deter rodents”.

In the meantime, Tony said he wasn’t taking any chances with his new Yaris: “I keep my car in the garage now, and it's a bit inconvenient to do that, but that way I can be sure it won't happen again.”

Has your car been attacked by squirrels or any other form of wildlife? Tell us all about it on Twitter, on Facebook or in the comments section below…