This device can flag if a car's mileage has been tampered with, and its maker aims to get it introduced as part of MoT 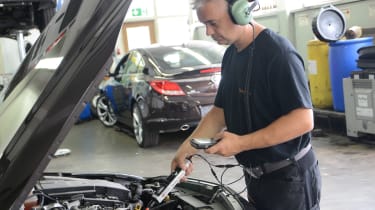 A revolutionary device that scans engines via ultrasound to give accurate mileage readings could stop car clocking in the UK and help meet EU targets.

A digital record of a car’s history held on a national database is required under EU legislation by 2017, while mileage correction companies will be outlawed, too.

The owners of Tacho-Spion, or Speedo-Spy, believe its patented algorithm could be the answer. The tech has been in development for 10 years and is already being used in Germany, Belgium, Ireland, Poland, Austria and as far afield as the US and Malaysia. Speedo-Spy checks the wear and tear of the engine via an ultrasound scan and gives a result – with five to 10 per cent accuracy – in minutes.

Michael Schmutzenhofer, Tacho-Spion CEO, is now looking for a UK partner with a view to introducing it as part of the MoT. He said: “Our ultrasound engine check simply protects any buyer of a second-hand car from being ripped off in a quick and effective way. If the odometer is clocked, a new owner may believe the next service is some time away when in fact it’s long overdue. 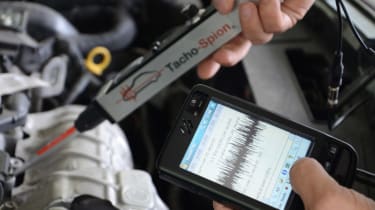 “Every country in the EU and actually worldwide is suffering from this widespread problem of odometer fraud.”

It’s estimated that a third of cars in the EU and half a million in the UK alone have inaccurate mileage – and it’s a problem that’s costing buyers and the economy millions.

The EU’s mandated national database aims to curb these numbers, but Schmutzenhofer claims just reading a car’s odometer annually is not enough to ensure the database is kept up to date and accurate. He added: “Nations have no choice other than to implement the ultrasound engine check if they seriously want to keep the database accurate.”

One potential issue with the tech, though, is if an engine hasn’t been serviced or has extreme wear and tear. In this case, the Speedo-Spy results would give a higher mileage than the car has covered. It wouldn’t have been clocked, but Schmutzenhofer said it’s still handy information for a used buyer.

He added: “Road safety is an important issue, too, which should not be ignored.”

Now read our guide to car clocking to find out if mileage correction is legal.