The 12 horses that licked a car's paint off, a stampeding cow and the other odd animal incidents costing UK car insurers 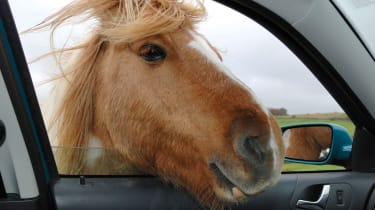 Hungry horses, crazy cattle and daring ducks have cost the insurance industry more than £1million over the past year, according to Saga. The over-50s specialist insurer said it had dealt with more than 500 animal-related cases in 2014, with some incidents more bizarre than others.

One customer had parked up at the Dartmoor National Park in Devon before going on a hike. When he returned, he found 12 horses had taken a shine to his car and were licking off the paintwork – the subsequent repair cost £1,200.

Another case was due to a cow at a prize-winning cattle show making a run for freedom. It uprooted the post it was attached to, dragged it through the car park and inflicted £800 worth of damage. A low-flying duck caused a motorist to swerve into a stone bridge – settled at £1,500 – while a cat under a bonnet damaged an engine, setting the insurer back £4,000. 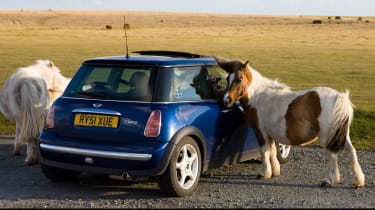 One driver was left ruing his country drive after he slammed on the brakes to avoid a deer, only to be smashed into by another stag, landing a £2,000 bill. Roger Ramsden, chief executive of Saga Services, commented: “It seems that just about anything can send a road trip into turmoil, and the over-50s have to have their wits about them when they’re in the driver’s seat.

“We understand that some things are out of our customers’ control, and they can’t predict when they may face low- flying ducks or wild deer darting across the road.”

Has your car ever been damaged by rogue wildlife? Tell us all about it in the comments section below...