Toyota Mirai is first hydrogen car to get plug-in grant 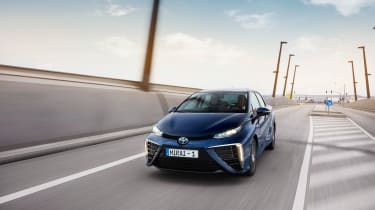 The Toyota Mirai is the first hydrogen fuel cell vehicle to be eligible for the Government's plug-in car grant - and roads minister Andrew Jones told Auto Express he expects more to follow.

The current £5,000 grant for plug-in vehicles runs until Febuary 2016 when a revamped tier system is expected to be introduced based on emissions and more fuel cell electric vehicles (FCEV) will likely be included, too.

The recently released Mirai is to be the first FCEV and its eligibility means potential customers will have to pay £61,000 to buy one.

The Government is trying to take a proactive role in hydrogen development - it's already invested £7.5 million in a hydrogen refuelling network. It's prompted Hyundai to confirm the UK as a launch market for its model, with Honda to follow in 2016.

The UK is one of the fastest growing markets for EVs in Europe and Mr Jones said the aim is make "almost every car and van zero emissions by 2050." 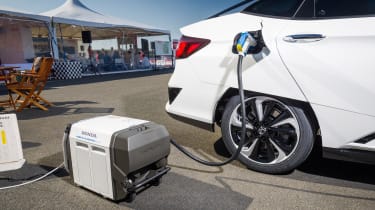 To help, a further £500m will be invested over the next five years to support the market and encourage drivers to buy them.

Mr Jones, who took on the role as roads minister in the Department for Transport in May 2015, added: "Hydrogen fuel cell electric vehicles (FCEVs), together with battery electric and plug-in hybrid vehicles, will play a significant role in a lower carbon future.

"I am pleased that both Hyundai and Toyota have chosen the UK as one of their limited launch markets for their hydrogen fuel cell vehicles in 2015, with Honda vehicles coming in 2016. We expect FCEVs to be eligible for the plug-in car grant, subject to manufacturers going through the appropriate application process."

Read the full interview with Mr Jones covering his view on speed limits, road safety and resurfacing, in the 25 November issue of Auto Express magazine.