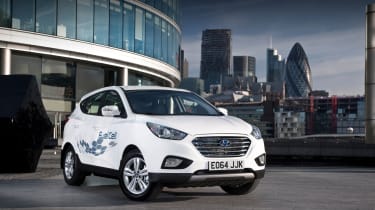 After planting its flag late last year with the first fleet ordered models arriving in the UK, Hyundai has confirmed that the world's first mass-produced hydrogen SUV, the ix35 Fuel Cell, will retail at £53,105 for private buyers.

It's available to order now from Hyundai dealerships, with that headline price inclusive of a substantial £15,000 government incentive, dubbed HyFive, which aims to see 110 hydrogen-powered vehicles deployed on European roads.

A further three refuelling stations will be introduced in London as part of the HyFive project, bringing the total accessible to the public to five. Last year the UK government also announced £11 million of extra funding for hydrogen filling stations nationwide, which Hyundai claimed will increase consumer confidence in the alternative fuel. 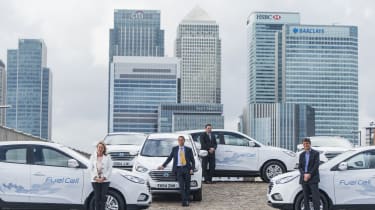 This is despite the EU scrapping its official targets for an increased amount of hydrogen filling stations by 2020, a move which didn't stop the UK from pressing ahead with its funding increase.

The UK deliveries aren't the first we've seen of the fuel cell SUV. Examples are currently on the road in 15 countries around the world, 11 of which are in Europe.

This generation of the ix35 Fuel Cell was unveiled to the public way back in 2012, when Hyundai also said it would be hoping to produce 10,000 examples by 2015. That figure was obviously a little optimistic, but it's clear the firm is making some progress.

The ix35 Fuel Cell is claimed to be able to manage up to 350 miles on a full tank of hydrogen before refuelling. The company claims it offers a similar driving experience to "an ix35 driven by an internal combustion engine". This means a 0-62mph time of 12.5 seconds, and a top speed of 100mph.

Do you think hydrogen can finally become a viable alternative fuel for the UK? Let us know in the comments below...