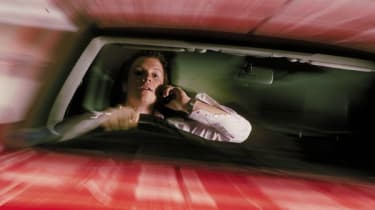 Motorists caught using a mobile phone behind the wheel are set to face higher fines along with four instead of three penalty points for each offence, under new proposals by the Department for Transport.

As previously reported by Auto Express, the Government is looking at increasing the fixed penalty notice from £100 to £150 and raising the number of points each offence carries in the hope of reducing road accidents and fatalities caused by distracted drivers. The fixed penalty notice was already raised from £60 to £100 in 2013.

The new proposals also take into account HGV drivers who would receive six points instead of the current three for each mobile phone related offence.

With four penalty points motorists would only need to rack up three offences before reaching 12 penalty points, at which time their licence would be disqualified. DVLA records show that 399 drivers currently have three consecutive mobile phone offences on their record.

Davenport's plans would see workers like delivery drivers or salesman get a ban after just two offences. She said: "If you get caught twice on a mobile phone during a set period of time you should receive a short-term ban.

"If you cannot conduct your professional life or business, that is really going to impact on people and I hope it would be a deterrent."

According to the Government, the fear of losing your licence is a more powerful factor in motivating good driver behaviour than fixed penalty notices. During a 2014 survey in England and Scotland, 1.6 per cent of motorists were found using a mobile behind the wheel – up from 1.4 per cent in 2009.

The proposal states: “The primary objective is to encourage first time offenders to opt for remedial training courses where they are offered as an alternative. The secondary objective is to act as a deterrent to offending and raise the ‘fear of getting caught’.

“The aim of this policy is not to overly punish first time offenders who genuinely make a mistake, but to come down hard on those who repeatedly offend and show no care for other road users.

Transport Secretary Patrick McLoughlin said: “We are delivering common-sense proposals that balance tougher penalties for dangerous drivers with practical steps to help youngsters and other more vulnerable groups stay safe on our roads." The consultation for the proposals will run from January 26 2016 to March 16 2016.

How can the Government stop people from using mobile phones at the wheel? Let us know your thoughts in the comments section below...