Latest car building figures show a 18.2% fall in output, with the SMMT partially blaming the Easter holidays for the drop in production 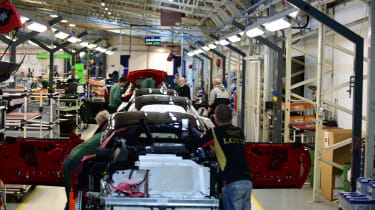 UK’s car production plummeted by nearly a fifth in April, with the slump partially blamed on the Easter holidays.

According to the latest figures by the Society of Motor Manufacturers and Traders, the late Easter bank holiday in April affected production. Output fell by 18.2 per cent this April, compared to the same time last year. April wasn't just a bad month for vehicle production, with registrations down by nearly 20 per cent for the month, too.

According to the SMMT, overseas demand has been the main driver of growth, with domestic output down by seven per cent compared to last year. Currently, 78.6 per cent of cars built in the UK are shipped abroad, mainly to the EU, with exports up by two per cent from last year.

“To guarantee future growth and investment into our industry and its vital supply chain, however, we need the next government to safeguard the conditions that have made us globally competitive, keeping us open and trading and delivering an ambitious industrial strategy for our sector.”

What do you think of the manufacturing results? Tell us your thoughts in the comments below...