Sebastian Vettel will start the United States GP from pole, ahead of Lewis Hamilton and Mark Webber 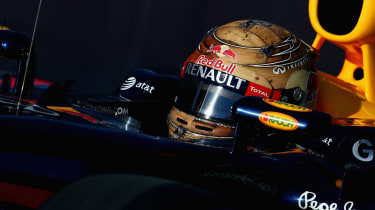 Sebastian Vettel has qualified on pole for the inaugural United States Grand Prix.

The reigning world champion - who could clinch the title this weekend - had dominated the weekend's practice sessions but, while he managed to top the timing sheets during the first and second qualifying sessions, it looked as if Lewis Hamilton was going to snatch pole.

The McLaren driver fell just short on his final lap, though, while Vettel pulled off a stunning final flyer to go a tenth quicker. His Red Bull teammate, Mark Webber, will start from third.

Romain Grosjean was fourth fastest after a couple of very quick laps in Q3, but a new gearbox means he will start from eighth. Kimi Raikkonen inherits fourth place, ahead of Michael Schumacher, who will start his penultimate Formula One race from fifth on the grid - 12 places ahead of his teammate.

Felipe Massa was seventh fastest and was expected to start sixth, but Ferrari took a tactical decision to break the seal on his gearbox which means he will start down in 11th. Nico Hulkenberg will start sixth, while Fernando Alonso will now start seventh - on the clean side of the track - having struggled for pace throughout the weekend.

Pastor Maldonado will start ninth, ahead of teammate Bruno Senna in 10th.

McLaren's Jenson Button could only manage 12th, having been forced to abandon qualifying because of reliability problems. He told his team over the radio that his car was losing power.

Paul di Resta will start from 13th, ahead of Jean-Eric Vergne and the Saubers of Sergio Perez and Kamui Kobayashi.

Nico Rosberg will start down in 17th for Mercedes, while Toro Rosso's Daniel Ricciardo failed to make it out of Q1 and will start from 18th.

Timo Lock was the fastest of the newer teams in 19th, just ahead of Charles Pic. Vitaly Petrov also outqualified his teammate, Heiki Kovalainen, to go 21st and 22nd respectively. Pedro de la Rosa and Narain Karthikeyan will share the final row of the grid for HRT, after the Indian driver stopped on track during Q1.

All drivers met the 107 per cent requirement, which means that all 24 cars will start tomorrow's race.